Thank you for the opportunity to submit this brief for your ongoing study of Bill C-22, establishing framework legislation for the future development and implementation of the Canada disability benefit (CDB).

Maytree is a charitable organization dedicated to advancing solutions to poverty through a human rights-based approach. Our submission focuses on ensuring that the development of the CDB is rooted in advancing the human right to an adequate standard of living, so that all persons with disabilities can live life with dignity.

In 2021, in the seven provinces with disability social assistance programs, disability programs had 60 per cent of all cases (ranging from 30 per cent in New Brunswick to 71 per cent in British Columbia).[2]

The underlying spirit of the CDB should aim to raise the incomes of low-income working-age adults with disabilities above Canada’s Official Poverty Line, the Market Basket Measure (MBM).

To determine how the CDB might fill the gap between existing income supports for people with disabilities and the MBM, we need to examine the income of people with disabilities who receive social assistance and who do not have employment or any other income. They are the group who experience the deepest levels of poverty and are in the most need of an adequate CDB.

Our data shows us that unattached single adults with disabilities across the country have consistently lived below the Official Poverty Line, if not below the deep poverty income threshold (75 per cent of the MBM).

Importantly, since the MBM does not take into consideration the additional costs associated with a disability, using existing MBM numbers under-represents the extent of poverty for people with disabilities. Still, the MBM can shed some light on the depth of poverty that adults with disabilities experience and the inadequacy of current welfare income amounts. The figure below from Maytree’s Welfare in Canada, 2021 report compares the welfare incomes of unattached single adults with disabilities in every province to the Official Poverty Lines and the deep income poverty thresholds of their largest cities.[3]

Adequacy of welfare incomes for unattached single with a disability households, 2021 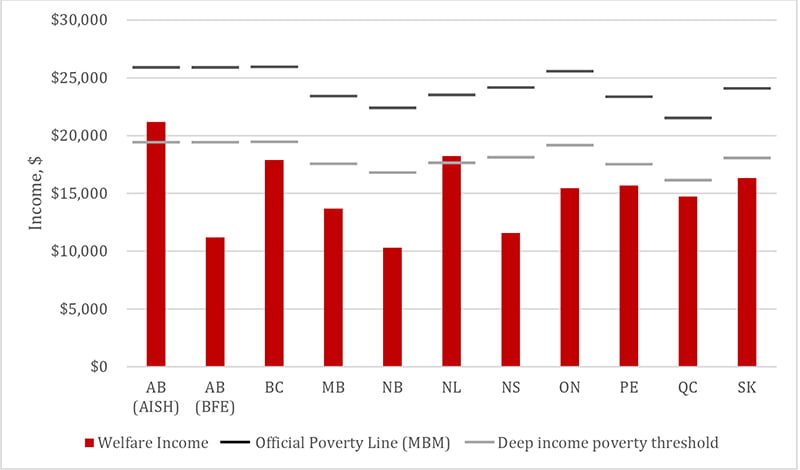 As the graph shows, there are no unattached single with a disability households that have welfare incomes that reach the Official Poverty Line in any province. Furthermore, the households in eight of the ten provinces are below the deep income poverty threshold. The income gap to reach the Official Poverty Line ranges from $4,700 to $14,700, depending on the province.

It is also worth noting that the federal government contributes very little to the welfare incomes of adults with disabilities. For example, unattached single adults with disabilities receiving social assistance and without employment income were eligible for between $300 and $800 per year in income supports from the federal government. This support came from the GST/HST credit in all provinces and territories, and the climate action incentive for those living in Alberta, Saskatchewan, Manitoba, and Ontario.

Other programs are also available to people with disabilities – the Canada Workers Benefits and the Disability Tax Credit – but they require recipients to have a minimum amount of income to be eligible. While people with disabilities who work are eligible to receive these benefits, many have significant barriers to employment due to not only health and accessibility but also workplace discrimination, which prevent them from accessing these supports.

There is a clear gap in Canada’s social safety net: Very few supports are available to working-age adults with disabilities, especially those living in the deepest levels of poverty.

We strongly support the adoption of Bill C-22. Moving forward, and in the spirit of a human rights-based approach to this benefit, we urge that the disability community be included in the development and decision-making around regulations for the CDB.

It is important for the federal government to get the development and delivery of the CDB right. While the regulations may take a year to come into force, people with disabilities are in need of urgent support. We strongly recommend the adoption of temporary enhancements in income support to give people with disabilities some respite until the CDB is operational.

Recommendation 1: As a temporary emergency measure, the federal government should expand eligibility and enhance the amount of the Canada Workers Benefit disability supplement.

With stagnating welfare incomes and an increasing cost of living, people with disabilities living in poverty cannot simply wait for the CDB to be realized.

Urgent action is required to implement a temporary measure that can at least begin to reduce the depth of poverty that adults with disabilities experience while the CDB is developed. This support should be exempt as income to not impact a recipient’s eligibility for other income-based programs, such as social assistance. To achieve this, there are three options:

Of the three, option one – enhancing an existing program – would be the simplest and most expedient to implement. Option two would require adopting a temporary program in parliament and its own regulatory process. Option three would require negotiations with provincial and territorial governments, which is unlikely to lead to quick policy action.

The CWB-DS is available to any adult with a disability residing in Canada with a working income above $1,150 per year and below $37,044 for unattached single adults with disabilities, below $46,997 for family with one adult with a disability, and below $51,799 for a family with two adults with disabilities. Full-time students and people incarcerated for at least 90 days are not eligible. The maximum benefit of the CWB-DS is $720 per year.

Three parameters of the CWB-DS can be enhanced to provide temporary alternative support to working-age adults with disabilities until the CDB is established:

a. CWB-DS should not require employment income.

Currently, an adult with a disability must have at least $1,150 in employment income to be eligible for the CWB-DS. This requirement excludes people with disabilities without labour market attachment who live in the deepest poverty, many of whom have significant barriers to employment. The CWB-DS should be available to those without employment income.

b. CWB-DS should have a higher maximum amount.

In 2021, a household – unattached single or family – with an adult with disabilities was eligible to receive a maximum of $720 per year from the CWB-DS. While this amount is certainly beneficial to them, it is not significant enough to noticeably reduce their depth of poverty. For example, in 2021, for unattached single adults with disabilities receiving social assistance and without employment income, the gap between their welfare income and the Official Poverty Line ranged from $4,700 to $14,700.[4] Significantly increasing the CWB-DS maximum amount could have a meaningful impact in reducing their depth of poverty.

c. The definition of disability to be eligible for the CWB-DS should be broadened.

For people with disabilities to have access to the CWB-DS, they must have an approved Disability Tax Credit Certificate approved by the Canada Revenue Agency. The DTC has long been criticized for its narrow definition of disability that excludes many people in need of support. Furthermore, people who meet the DTC definition but have limited or no labour market attachment likely would not have applied for a DTC Certificate because they have never been eligible to receive the DTC. Alternatively, eligibility to the CWB-DS should be extended to all people with disabilities who already receive disability-related social assistance, program or supplement, at the provincial and territorial level and/or federal disability benefits.

Still, this temporary measure does not come without its shortcomings. Most notably, because the CWB-DS is a tax credit, adults with disabilities would have to file a tax return to receive it. It isn’t responsive, either, meaning that people who become eligible during the benefit year would not be able to receive it until the following tax year.

An increase in the CWB-DS maximum amount, while expanding eligibility to those without employment income, could meaningfully lower the depth of poverty people with disabilities experience. Importantly, the federal government can quickly expand and enhance the CWB-DS while it continues its efforts to develop and implement the CDB.

As it stands, Bill C-22 is framework legislation for the development of the Canada disability benefit, which means that it does not prescribe any parameters on what the CDB model will look like. We understand that the government intends first to enshrine the CDB in law and then do its due diligence at the regulation stage. We hope this will involve the participation of disability communities at every stage of the process. At the same time, we understand the concerns of some members of the HUMA committee that there are risks in advancing Bill C-22 without some baseline articulation of what the benefit will aspire to.

We encourage HUMA to embed the concept of “guaranteed minimum protections” in Bill C-22 so that there is clarity on foundational elements of the CDB. These minimum protections do not prescribe absolute minimum benefit amounts or eligibility criteria, but are principles that illustrate the goals that future CDB regulations should achieve.

We would like to see the following five protections integrated into Bill C-22:

The Canada disability benefit should allow people with disabilities to have an adequate standard of living. This means that the CDB should allow unattached working-age adults with disabilities to reach the Official Poverty Line in every region in the country. It should not replace existing programs, but supplement them to allow the incomes of adults with disabilities in deep poverty to rise above the poverty lines. The CDB must also be indexed to inflation; otherwise its value relative to the Official Poverty Line will decline over time, and the impact of the CDB will be reduced.

The definition of disability must be broader than that of current federal disability benefits, like the DTC.  Notably, it should include people who have episodic disabilities.

The definition of disability must be operationalized so that it can be more easily applied. There should also be an appeals process so that if people with disabilities have concerns with their benefit, there is a body to take the matter to with full transparency. It should not be left to the tax courts.

People can develop a disability at any time in the fiscal year. They should not have to wait until the following year to file a tax return to become eligible for the CDB. There should be a process to access the CDB when it is needed.

The CDB should be accessible to people with disabilities who need it. A large proportion of income supports available to working-age people are tied to employment, and not as of right. While they are purportedly designed in a way to encourage increased labour participation, such supports subversively keep benefit rates low. This should not be the case for the CDB because many people with disabilities cannot work or have barriers to work. They should not be punished with lower benefit amounts under the premise that it will motivate them to increase their ties to the labour market. CDB benefit levels should ensure people with disabilities have an adequate standard of living.

Written submission to HUMA for the study of Bill C-22 on establishing the Canada disability benefit.
Sign up for our newsletters