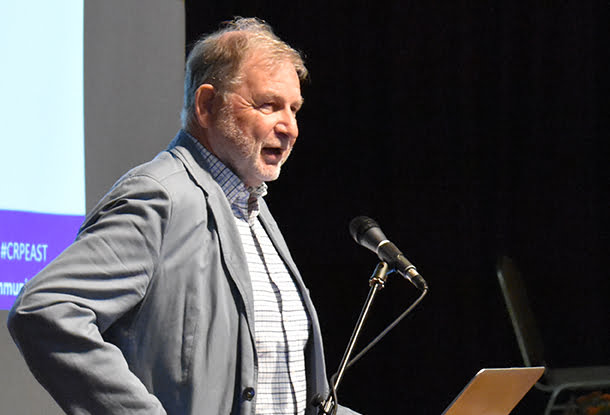 I know you’re not all from the Toronto region, but you may understand that we’re distracted these days by the actions of Ontario’s new premier Doug Ford. Particularly by his threat to use the Constitution Act’s notwithstanding clause to force the shrinking of Toronto City Council. There have been lots of dramatics and noise in the press, so it has been hard to miss.

This is a decidedly local issue in some ways. After all, not that many people care how big Toronto Council is. And if they do care many might agree with shrinking it.

But the invocation of the notwithstanding clause makes it more than just a local issue because it threatens the authority of our Charter of Rights and Freedoms. Our Charter was enacted in 1982 to codify the human rights of all people in Canada. And I want to talk to you about human rights, and why I think they are of vital importance to us in our work fighting poverty, and why it is dangerous to mess with them.

The history of concern about human rights goes back a long way, to 539 BC when Cyrus the Great conquered Babylon and immediately freed the slaves, established freedom of religion and racial equality, and codified this on a clay cylinder, the so-called Cyrus Cylinder, the first charter of human rights. It spread over time with milestones like the Magna Carta in 1215 and successive rights adoptions in England, France, and the United States. And it particularly gained momentum after the Second World War in a direct reaction to the outrageous trampling of human rights by the Nazis throughout Europe and by Stalin in Russia.

The international human rights movement had its signal moment in 1948 with the passing at the United Nations of the Universal Declaration of Human Rights, a chief drafter of which was Canadian John Humphrey. It was followed in 1976 with the UN International Covenant on Social Economic and Cultural Rights.

What are these rights? There are of course legal and political rights, like the right to a fair trial, fair elections and the vote, and freedom of expression; freedom from enslavement, torture and inhuman treatment; and freedom of movement. But there are also rights like:

My guess is that this is a catalogue of what people in this room are working on in service to your community. You’re working hard on at least one of these issues either at the programmatic or policy level. And like Sisyphus pushing that rock up the hill, some days you move it up, and some days it slips back, but you keep your shoulder to the rock. A helpful government can make the incline less steep, and then there are other types of governments that make the work a lot harder. But, it is never easy.

Governments make choices. Sometimes they think affordable housing is something they should invest in. Sometimes they will develop a plan to make lives easier for people living with disability. Sometimes they’ll want to fix the broken bail and remand systems so vulnerable young people don’t have their life chances destroyed by a brush with the law.

And sometimes they don’t. They don’t act, because they choose not to act. Which leads to the observation that poverty and disadvantage are not inevitable, but are constructed. They are constructed by the choices we make as a society: by how much companies choose to pay employees; how welcoming communities choose to be for newcomers; and what kinds of policies governments adopt.

The support of human rights can change this, because here is something to know about human rights: they are not something governments give us, or anyone else gives us. They belong to us, to each of us. They inhere in us because we are humans living on this earth. Governments can decide whether to support these rights, but they can’t pretend we don’t have them.

Canada has gone further. It passed a Bill of Rights in 1960, and the more elaborated Charter of Rights and Freedoms in 1982. The Charter is our most powerful document and while it focuses explicitly on political and legal rights, it does implicitly support social and economic rights through identifying rights to security of the person and the right to equal treatment.

What is interesting about rights to me is that they take away the question of whether public policy will support a particular right or not, and makes it a question of how it will do it.

Here’s an example. Jean Yves Duclos is the federal minister of Families Children and Social Development, and he developed the National Housing Strategy. He was urged to include housing as a human right, which he grasped intellectually quite readily. After consideration and discussion, he agreed to do that, and it is part of the policy. But when officials and some other politicians saw it in there, they recoiled. One of them said, “We want to put people in housing, not courtrooms,” to which many offered the reply that if they put people in housing they wouldn’t have to worry about courtrooms. But Duclos is persisting in developing how that support of housing as a right gets expressed by government in program and policy, and being very open to external advice and counsel.

The beauty of recognizing something as a right is that people have recourse when they don’t get it. Usually there is a process of complaint and appeal, and ultimately their access to their right can be tested in court. A right is an empty promise without assured access to it.

Which brings us back to what is happening in Ontario. The premier has pulled out the notwithstanding clause in effect to deny a right to people. And he has said he won’t be shy in doing it again. That is, he won’t be shy about not supporting any right that he doesn’t want to support.

I’ve talked to a number of people who were in the room in 1982 when the Charter and notwithstanding clause were developed. One of the chief proponents of the notwithstanding clause was Saskatchewan premier Allan Blakeney, who argued that he needed it when he decided to do something to support a minority group, like an Indigenous band or people living with a disability, so he wouldn’t be sued by others who wanted similar treatment on the basis of discrimination or unequal treatment. It was intended to be used in the positive, not to gratuitously deny rights on a widespread basis.

Our rights are important. They open a doorway for us in our fight against poverty. Along with our social justice, economic and moral approaches, all of which have been successful to some extent, it is a tool in our toolkit. Having it taken away from us on a whim, or as part of a grudge match, is a gross violation.

That is why we’ve been a bit preoccupied. It may seem like a local story, but it isn’t just that. If this passes, then someday someone may come for the rest of us, stifling our rights. It would harm our work, and harm the people in the community with whom we work, and on whose behalf we work. We are in a testing moment.

I wish you well here over the next few days. The work you do is vital, and we at Tamarack are honoured to be in your company.

Keynote delivered at the Tamarack Institute’s Cities Innovating to Reduce Poverty conference held in Mississauga from September 18-19, 2018
Sign up for our newsletters