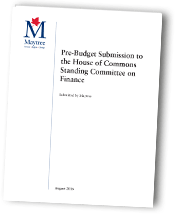 The Canada Child Benefit (CCB) is a transformative policy that will provide immediate and meaningful help to low-income families with children. In our pre-budget submission to the House of Commons Standing Committee on Finance, Maytree recommends that the federal government preserve the strength of this investment by indexing the CCB to inflation in the 2017 budget.

To the members of the House of Commons Standing Committee on Finance:

Maytree has been dedicated to creating solutions to poverty since 1982. We work with governments, researchers, the non-profit sector and community organizations to build strong and vital communities.

We are pleased to offer comments and recommendations for consideration in the development of the 2017 federal budget. While Maytree’s work touches on a variety of policies and programs that affect the lives of Canadians living in poverty, we would like to focus our comments on a single program that is crucial to the goal of ending poverty in Canada: the Canada Child Benefit.

In the last federal budget, the government introduced the Canada Child Benefit. This new program builds on the strengths of the reforms that brought in the Canada Child Tax Benefit and National Child Benefit Supplements nearly 20 years ago to reduce child poverty and lower the welfare wall. The new reforms are a transformative policy change that will provide immediate and meaningful help to low-income families with children. Conservatively, this benefit is expected to move 300,000 people out of poverty – some analysts suggest this number will be closer to 397,000.[1] This is the most significant step towards reducing poverty in Canada in a generation. The Canada Child Benefit is an investment built on proven approaches to reducing poverty and directs support to those who need it most.

As we prepare this submission, Canadian families are receiving their first Canada Child Benefit payments. With this money, they will begin spending on goods and services that will benefit their families and their local economy. Strong evidence demonstrates that unconditional transfers in the hands of low-income families are well-spent: families use the money towards health and education expenses for their children, and to improve the family’s overall living conditions.[2] They will buy better, healthier food, and school supplies; they will spend it on better housing and caring for children. As a contributor to better health and educational outcomes for children, the Canada Child Benefit is a major investment in our future prosperity. Just as significantly, the Canada Child Benefit respects Canadians’ dignity by allowing them to make their own decisions about how to spend it.

In short, the Canada Child Benefit benefits us all.

As it stands, the poverty-fighting potential of the Canada Child Benefit is at risk of eroding over time, as payments are not set to adjust for inflation. This will reduce their value in real terms.

With this in mind, we respectfully recommend that the federal government preserve the strength of this investment by indexing the Canada Child Benefit to inflation in the 2017 budget. We focus our submission on this particular detail of design because of its real and meaningful impact on the 90 per cent of Canadian families with children who receive the benefits, and in particular on the families with the lowest incomes.

Inflation has not been a prominent concern for the Canadian economy in recent years. However, even at relatively low rates of inflation, the decline in real terms of Canada Child Benefit payments will be felt deeply by those with very little margin in their budgets, for whom every dollar counts. Moreover, we cannot assume that the condition of low inflation will continue in the longer term.

The Bank of Canada projects that inflation will be 2.1 per cent in 2017, and remaining around two per cent for the following few years.[3] At the outset of the program in July 2016, the maximum benefit is $6,400 for each child under age six living in a household with less than $30,000 income. Without indexing for inflation, the purchasing power of this benefit falls by $382.61 by 2019.

To put this in perspective, the average cost of communications services, including telephone and internet, is $100-$212 per month.[4] A loss of $382.61 translates into two-and-a-half months of scrambling to pay for these basic utilities, which today are necessary for job-searching, accessing government services, doing school work, and staying in touch with family and friends.

Further, the cost of many basic necessities is rising faster than the rate of inflation. In 2016, the overall cost of food is expected to rise two to four per cent,[5] a trend that continues from 2015, when the average cost of fresh fruit rose by 6.3 per cent, and fresh vegetables by 8.1 per cent.[6]

Similarly, the cost of housing is outpacing inflation. In 2015, the average monthly rent for a two-bedroom apartment rose by 2.9 per cent – nearly triple the rate of inflation during that same year.[7] Child care costs, too, are rising faster than inflation in many Canadian cities. In Mississauga, daycare rates rose by 3 per cent in 2015; in St. John’s, they increased by 4 per cent; and in London, by 5 per cent.[8]

Minister Duclos has suggested that the Canada Child Benefit will be indexed by 2019.[9] However, any delay will be felt by the families who need it most. After making a great stride towards reducing poverty in the 2016 budget, failing to adjust will mean steadily inching backwards. The simplest action that the federal government can take in next year’s budget to reduce poverty and strengthen the economy is to index the value of the Canada Child Benefit to keep up with inflation, without delay.

The federal government should preserve the strength of the Canada Child Benefit by indexing it to inflation in the 2017 budget.
Sign up for our newsletters