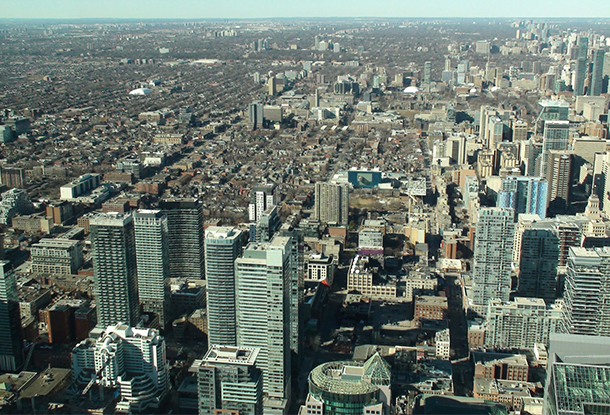 “Canada is rich by nature, poor only by policy,” Goldwin Smith told the New York Chamber of Commerce 130 years ago. Smith was a professor of history residing in Toronto, and in his speech he commented on the natural and human capital that abounded in the country, but lamented how little had been done with it.

Were he with us today, might he make the same comment about Toronto? Or about any of our major cities?

Toronto is rich by nature. Its situation on the Great Lakes has made it a vital station in the transport of goods from the Rocky Mountains to the Atlantic Ocean and beyond. The fertile land around it has supported productive farms. Through the industrial revolution into the information age, the Toronto region emerged as the principal anchor of the eastern Great Lakes, as Chicago anchors the western Great Lakes. The Great Lakes-St. Lawrence River has become one of the most prosperous regions in human history. In the aviation age, Toronto’s Pearson Airport has become one of the most dynamic hubs in the world, and a principal gateway to the regional economy.

Decisions made outside Toronto have further bolstered the region. John Robarts, serving as Premier of Ontario from 1961-1971, dramatically expanded the university and college sector in the province, with much of that growth in the Toronto region, providing a steady stream of high quality graduates for business and community. The expansion of the hospital sector underpinned the health of the population. The decision of Quebecers to elect a separatist government in 1976 drove business headquarters out of Montreal, making Toronto the undisputed business capital of Canada.

The result of all these things made Toronto the principal city of Canada; and being the major city of a sovereign country next to the biggest economy in the world further accentuated the stature of the city.

A look at other major cities in Canada shows the same trend on a regional basis, with their richness in natural, human, and social capital giving them strength and great importance in their region.

The stature of Canada’s major cities is also reflected in how they are ranked internationally. Twenty-five years ago, barely anyone took note of them. But now Toronto is often ranked in the top ten, and many other of our big cities rank highly on quality of life and other indices.

But has much of this big city success been a result of policy, or at least policy made at the municipal level? When we look at how our transit and housing have lagged behind what is necessary, or our ability to settle and include immigrants has stalled, we see signs of failure. This has been characterized as a failure of cities to manage a growing population, either of those coming from other parts of Canada or those from abroad.

Is this a failure of policy, as Goldwin Smith might observe, or is it a failure of the politicians or of the public service? Of course, politics and the public service are linked, but they don’t necessarily operate in lockstep. One can see in municipalities across Canada a skillful public service capable of sound financial management, durable long-term planning and development, and good service. Most of them would themselves argue that they are not perfect, but they are often very good.

And there are great politicians at the municipal level, and we currently enjoy in our large cities one of the finest cadre of mayors we’ve had in Canada.

But do we have good municipal policy in Canada? Is it policy that has carried our cities forward, or are our councils merely happy passengers? It is hard not to conclude that our municipal politics is hitting below its weight. Although, given the paucity of governance and fiscal tools at hand for cities, they have a bit of an excuse. Building transit and housing is expensive, beyond city budgets limited to property tax and other land-based revenues, unlike provincial and federal governments which have income and sales tax revenue. And with the “weak mayor” system common in Canada, it is difficult to organize forward-looking and ambitious plans. But our cities themselves have done little to overcome their limitations, other than begging other levels of government for money.

We are just concluding the municipal election season in many provinces. In Toronto the campaign was waged amidst a gratuitous disruption inflicted by the premier which changed the rules midgame and made it more difficult for voters and candidates. But now the dust is settling, and it is time to remind the winners that winning is only a small part of the goal, and only the start of their obligation.

The real obligation is to govern wisely and well, to take on the key issues like transit, housing, and immigrant settlement. Because transit is so expensive to build, but so necessary to equity and prosperity, money cannot be squandered on second-rate solutions. Because housing underpins family life and the success of kids in school and community, the ability to be productively employed, and the strength of the local community, it must be a priority. And because immigrant inclusion in work, school, and community is not only a key to successful settlement for newcomers but for the strength of the whole community, it cannot be ignored or pushed to the margins. All of these things are in the realm of the city and its councils to influence and support.

And all of these things are not merely nice to do, but are an obligation under Canada’s commitment to human rights. Canada has signed on to international rights covenants which bind the national government and all subnational governments to support those rights. So city governments must find the ways to support the right to housing, for example, by making sure everyone has access to safe, secure, and affordable housing. It must support access to safe and dignified work for everyone, including newcomers. These are the obligations of all Canadians, including city councillors.

So the challenge is there for our politicians to raise their game, to become dramatically more effective in creating and implementing stronger public policy in our cities. We have been made rich by nature. They can make us rich by policy.

Our politicians must raise their game to become dramatically more effective in creating and implementing stronger public policy in our cities.
Sign up for our newsletters