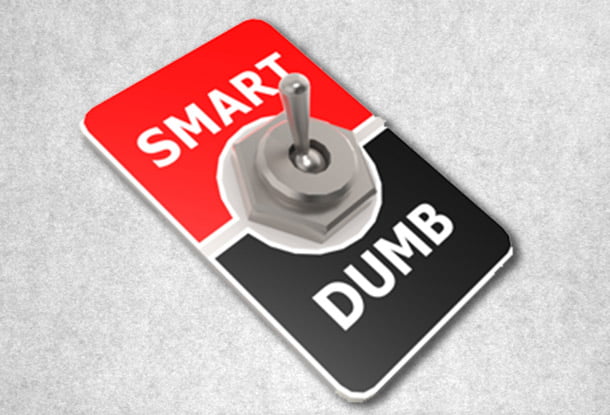 If you had a choice, would you choose something that is smart or dumb?

It seems like an obvious choice, and most people would opt for something smart, except on the very odd occasion where something dumb is good enough.

Canadians will have a choice in 2015 about which government they want, and it may boil down to choosing between smart and dumb.

What is smart, and what is dumb? Borrowing from the world of technology, smart is a system which actively employs feedback to make better decisions. When you are driving down the road using a navigation system and you miss a turn you should have made, the system will immediately recalculate from your current position and find a new route to your destination. A dumb system would lack the ability to engage the new feedback (your missed turn) and leave you on your own.

Conversely, it is now widely recognized that the U.S. “Just Say No” anti-drug campaign has been a failure, but the government for many years ignored the feedback and kept funding the program. Drug use among the targeted audience increased rather than decreased, enforcement of trafficking resulted in more drug trade, and efforts to deter production failed. All this feedback was ignored because the system was immune to it, and therefore a dumb system. One of the dictionary definitions of dumb is “not having the capability to process data” (Merriam Webster).

In Canada, we now have massive, even overwhelming, evidence on the issues of poverty, climate change, and the effects of incarceration particularly on the young.

Yet, we remain in good part unswayed by the evidence. We have programs like the Canada Child Tax Benefit or the Working Income Tax Benefit to help ameliorate poverty, but we underfund them resulting in leaving many still mired in poverty. We withdraw from international agreements dealing with climate change, and generally drag our feet citing the old chestnut of a conflict between climate and economy, now largely discredited. And we entertain “tough on crime” policies which promise to lock people up, throw away the key, and lately cut back on their nutrition.

So we can choose the smart or the dumb options, between paying attention to the feedback and evidence, or ignoring it. Choosing the dumb option is made easier or inevitable when there is no feedback, of course. We have written previous Maytree opinions about the elimination of the federal long-form census which was a treasure trove for making smart decisions. As time goes by, it is even more clear how destructive that was, with effects being felt across sectors and across the country. Opting for a smart system would require restoration of the ability to generate feedback and evidence.

Maytree is non-partisan and cannot endorse any political platform or party. That doesn’t mean we cannot have our views, particularly about those things which are important to our ability to work on poverty issues. As individuals, we will be listening very carefully to what is said in the campaign about being smart in governing, and we will be certain to choose the smart option.

We can choose the smart or the dumb options, between paying attention to the feedback and evidence, or ignoring it.
Sign up for our newsletters