Who Votes in Toronto Municipal Elections? 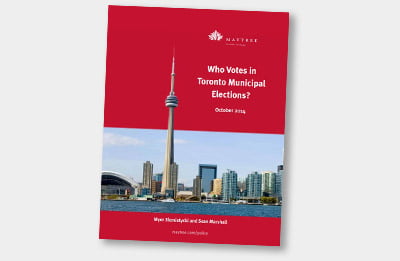 Toronto has a poor record of voter participation in civic elections. In 42 of Toronto’s 44 wards less than half of all eligible voters cast a ballot in recent city elections. The turnout improves only when elections are hotly contested. While areas with lower voter turnout typically have high concentrations of immigrant and visible minority populations, there is minimal correlation between voting and an area’s average income, and no correlation to an area’s proportion of tenants and homeowners.

These are some of the key findings of Who Votes in Toronto Municipal Elections?, the first such study on voter turnout over the past three municipal elections in 2003, 2006 and 2010. Conducted for Maytree by Ryerson University Professor Myer Siemiatycki and geographic analyst Sean Marshall, the study explored the connection between municipal voting behaviour and some of Toronto’s prime demographic characteristics like immigrant status, visible minority identity, income and home ownership.

There is some good news

While the poor turnout is cause for concern, the study shows there is nothing inevitable or pre-determined about who votes in municipal elections. Thorncliffe Park is a prime example of what can be achieved if a more diverse political leadership results in deeper community engagement. With a large concentration of immigrants and visible minorities, this inner city area is one of Toronto’s highest voting neighbourhoods.

There are many reasons to take the democratic deficit arising out of poor voter turnout seriously. It threatens the legitimacy and confidence of local government and risks local officials being out of touch with public needs and concerns. It can lead to areas or communities within the city being marginalized from public decision-making.

To overcome low turnouts, the study recommends more effort and creativity to build a civic culture that promotes greater engagement. Public education and electoral reform could make municipal voting more user-friendly. As there is room for experimentation, non-partisan initiatives large and small need to be taken by municipal institutions, political candidates, community organizations and individuals.

Watch Myer Siemiatycki’s presentation at Maytree’s Get Out the Vote conference on April 1, 2014: