Social assistance is the income program of last resort. It is intended for those who have exhausted all other means of financial support. Every province and territory has its own social assistance program(s) and no two are the same.

In Saskatchewan, there are three social assistance programs:

SAP is a basic income support program for families and individuals who, for various reasons, cannot meet basic living costs. The program has an adult allowance which includes food, clothing, travel, personal, and household items. In addition, there is a shelter allowance which varies depending on the community, accommodations (shared or not), employability, and family size. A variety of other financial benefits as well as Supplementary Health Program coverage are provided.

TEA was introduced in 2003 as an income support program to assist applicants participating in pre-employment programs and services or those who are “job ready” and seeking employment. TEA recipients are given a fixed allowance to provide for basic needs such as food, shelter, clothing, and utilities. Recipients are expected to budget the benefits to meet their monthly needs. TEA recipients also receive coverage from the Supplementary Health Program.

SAID was designed in collaboration with members of the disability community. It provides an income for persons with significant and enduring disabilities separate from SAP. It was introduced in 2009 for individuals in residential care settings and expanded in June 2012 to include people who live independently. Over the course of 2011-12 and 2012-13, approximately 6,500 former SAP clients with disabilities were enrolled in SAID.

Eligibility for the SAID program is determined by financial criteria as well as a disability impact assessment. SAID provides a living income benefit for basic needs, a disability needs benefit, and Supplementary Health Program coverage.

During 2018/19, on average, there were 14,300 cases in the SAP, and 27,600 beneficiaries (individual claimants, their partners, and dependent children). These numbers have fallen almost every year over the last two decades.

During 2018/19, on average, there were 15,600 cases in the SAID program and 18,800 beneficiaries. These numbers rose sharply in the two years after eligibility was expanded in 2012 and have risen at a slower pace since then. 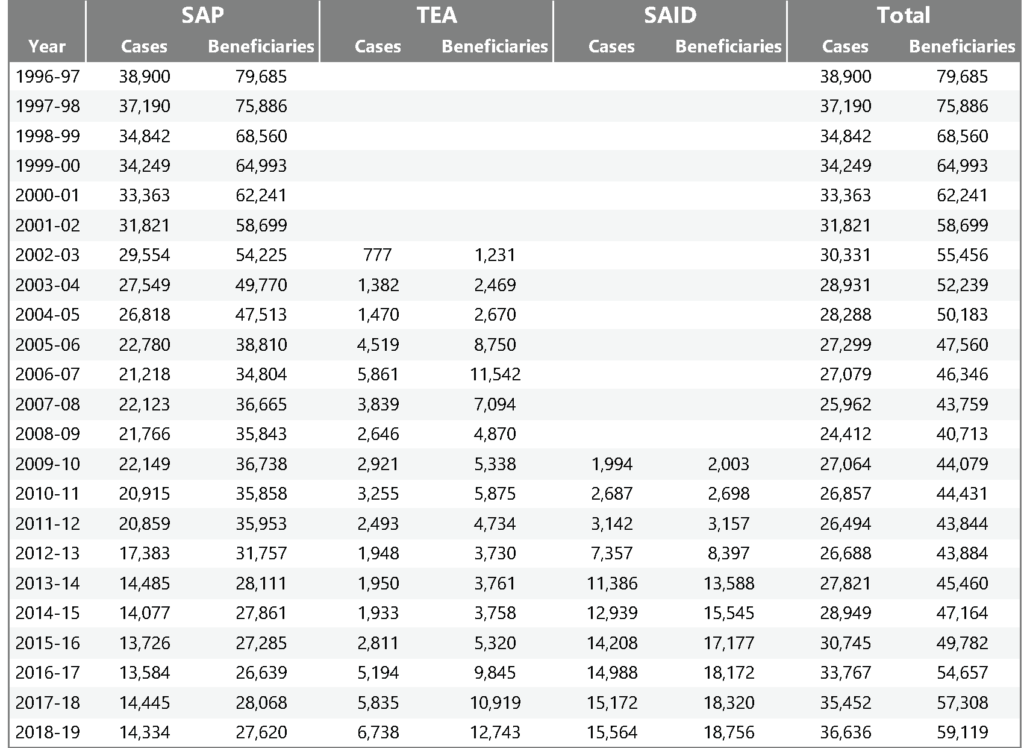