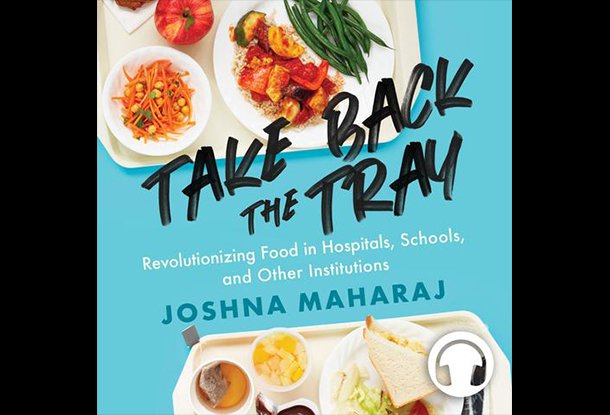 Food is our common denominator as humans. We need it to heal, to grow, and to thrive. It’s a source of strength, joy, connection, and life. Good food nourishes us, and it’s time for us do the same for our food system. So let’s take back dignity, hospitality, sustainability, and equality.

Joshna Maharaj, Take Back the Tray

Joshna Maharaj is a chef and activist who’s focused on helping people develop and build a more nourishing relationship with their food. In her just published book, Take Back the Tray, she writes about one particular aspect of our food culture: how food is treated in institutions, such as hospitals, schools, and prisons. As she writes “What I’m looking for is a major culture change. I want institutions to bring health, humanity, and hospitality back to food while also building sustainability, supporting the local economy, and reinvigorating the work of frontline staff.”

We reached out to Joshna to talk about some of the issues she wrote about in her book.

Markus: In your book you write, “Access to good nutritious food is a basic human right, not a luxury.” Can you talk a bit about that?

Joshna: At the very basic, just as by virtue of the fact that we are humans, we need access to good quality food in a consistent way.

But food is more than just about the plate. When the discussion about institutional food emerges, what everybody wants to talk about is cost. And any dreams that people have of improving the food is a luxurious excess, and that’s where things just really start to take a turn.

When I was working in hospitals, it made no sense to me that the quality of the food was set at such a low bar in comparison to, for example, the atriums of these fabulous spaces. They have this wall of glossy brochures telling you about all their boundless vistas of excellence and innovation, and it really confused me that this attitude was not applied to the food for some reason.

I remember thinking, “Okay, so you know how to shoot for greatness, you’re just choosing not to apply that to the food that you serve. You don’t think that the food is important enough to be at the same level as the patient care, or the research, or whatever it is.”

To me that meant doctors don’t get this, they don’t see what’s going on, and, therefore, they’re not advocates or allies. And then I did some digging and I discovered that in an average sort of Canadian medical school curriculum, it’s like a few hours of nutrition education that a doctor gets.

It explains where we are, but it is completely nonsensical.

Markus: In your book, you describe how institutional food is dehumanizing the ones who cook our food as well as the ones who pick and produce our food.

Joshna: That’s exactly it. It’s this chronic and consistent undervaluing of the human hands involved in this process. We essentially buy into the idea of efficiency and innovation, and whatever the nonsense is we’re going to say. What it’s really about is budget adherence and making a spreadsheet look nice.

We have extinguished the value of human work, which is suggesting that a machine can do a thing just as well, or that really aggressive use of the land can produce a better thing for us. That’s the story that is being told. This has led to collapsing economies and a whole workforce of people who don’t feel like their work is useful or valuable or effective. It doesn’t matter to this system.

When we talk about food security, we’re talking about the regular steady access to wholesome, nutritious food. And that is beyond just what you’re able to eat, it’s what you’re able to grow, it’s about knowing how to cook, and it’s the proximity to good stores that sell proper wholesome food that you can access.

What I’ve loved about my connection with The Stop and this model is that while you’re here for lunch, or while you’re waiting in line for a food bank hamper, maybe we can talk about housing or your immigration status. Or you can join a community kitchen and learn how to cook or take part in garden programs. Or maybe if you’re a new mom, you can come to programs with other new moms to connect to nutrition and share clothes when the kids grow up.

Just emergency filling of the tank is not enough. We have to think about capacity building and all of the other ways. Because the beauty of what I learned at The Stop was that, while there’s this dismal tale about the fact that when hunger hits everything comes crashing down, I also learned that when you inject good food engagement and programming, it all comes back to life.

The system is very much like a plant, if you will. It’s about the inputs and the attitude and the understanding that food is about a lot more, that our relationship with food as humans and in community with each other is about much more than just what ends up on the plate.

Markus: Are we making progress in getting to a better food culture?

Joshna: I am actually really encouraged. We are closer than we were when I started this work, I think. And as difficult and challenging as the pandemic has been, one of the gifts of the circumstances around this has been a renewed focus on our food and the source of our food.

Markus: Do you see a change in the schools, hospitals, and other institutions?

Joshna: Yes, I’m very confident. While I can definitely outline the distance that still needs to be covered, for sure, I can tell you that my first hospital project was in 2011. In nine years the spike in attention to institutional food has steadily risen. I remember those early days when I would talk about my work, I had to sit and give people this big whole conversational explanation of what I was talking about. Whereas now I can just say, “I focus on rebuilding institutional food systems.” And everyone’s like, “Oh, like hospital food?” And I’m like, “Yes, exactly.” People get it, it’s on the radar.

I will tell you it is too slow for my taste, and I sometimes will pull my own hair out about how messy and complicated this monster is to untangle. But I don’t have to explain or defend the need for this work any longer. I used to, and I don’t anymore.

Markus: The last chapter in your book talks about “social gastronomy.” You write, “Social gastronomy is the work of chefs who step into the role of activists and advocates for food and for communities.” Can you expand on this?

Joshna: What I love about this idea is that the name social gastronomy suggests a variation from the original tradition or canon of gastronomy. Essentially the idea is that naturally as chefs, we are nimble and can pivot, we figure it out, we make it work, we work with crazy circumstances, and we always get the plates out. That is just the nature of being a chef, that’s just it.

The term social gastronomy really creates the scene to suggest that it is just doing what we do as gastronomists, if you will. We can in fact have these beautiful change-making impacts on the world, outside of our restaurants. And as somebody who was a chef who has decided to work outside of restaurants, I have always felt like my work has been sort of weirdly in the margins. When I heard this term, I was like, “Oh, that’s what I do.”

The real beauty that I see here for chefs is the understanding that the hospitality that we are taught is a guiding principle for us, it inherently maintains people’s dignity because there is no distinction made about who is sitting at our table. The point is that there is somebody, and that they are a guest, and this is the way we treat them.

It doesn’t matter whether they pay, it doesn’t matter how they’re dressed, none of that matters. None of that is ever even really articulated. It is just your guest. I have decided that that is a really beautiful opportunity for us.

If it is not us to respond to these needs, who else? Who else cares as much about food as we do? This is our job as far as I see it.

Markus: For those of us who are interested in changing our current food culture, what would you suggest we should do?

Joshna: One of the beautiful things about this situation is that there are many entry points. It could be anything from devoting a certain amount of time a week to cooking a meal and sharing it and eating with other people. It could be really taking a more critical look at how you spend your money on food; if it’s $150 a week for one person, think about where that $150 goes. How close are you to getting that money directly to the people who produce all that food? Just consider it. Then there’s other things like, where do you buy your food from? What is your routine on all of this? And then there’s some people for whom advocacy is a more effective move.

Markus Stadelmann-Elder is Director of Communications at Maytree.

Interview with chef and activist Joshna Maharaj about her book Take Back the Tray.
Sign up for our newsletters