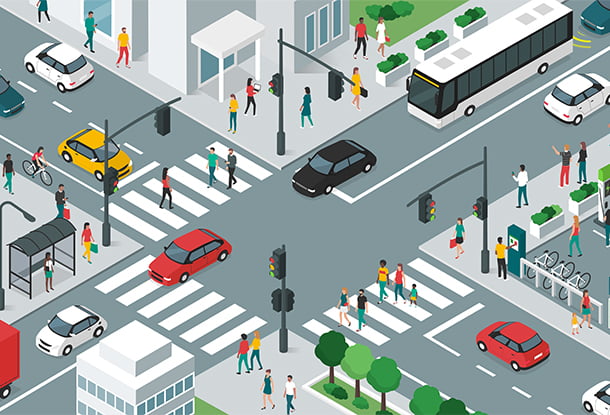 The belief that smaller government and unfettered markets are best able to meet our individual and societal needs has been the main organizing principle shaping western societies over the past 40 years. It has been used to rationalize cuts to vital community programs and services, or even the complete withdrawal of government from key social areas, as was the case with housing in Canada in the 1980s. It has often prioritized private interests over those of people and communities, and contributed to growing inequality.

Nowhere are the consequences of this belief more starkly felt than in our cities. While luxury condo developments soar, subsidized housing waitlists grow, and shelters are packed beyond capacity. Food bank use has been on an upward trend in nearly all major cities across Canada, as the incomes of the wealthiest tier have continued to rise. The high costs of city living have pushed people – including many essential workers – further away from their jobs and economic opportunities. Indigenous, Black, and other communities of colour have been disproportionately impacted by these worrying trends.

Of course, the pandemic has only exacerbated the social and economic challenges in our cities, giving rise to a growing sense that if we are to “build back better,” it must be on a foundation based on equity and inclusion.

But what does this mean exactly, and how do we achieve it? Fortunately, we don’t have to search very far for an answer: a human rights approach provides a useful, ready-made blueprint.

Though at times perceived as vague or idealistic, human rights have been continually defined and developed over many decades. For example, the norms and standards associated with the human right to food, accessibility for people with a disability, or adequate housing – all of which fall under the umbrella of economic and social rights – have been clearly articulated. Guidance on implementation, monitoring, and accountability is also specified, and focuses on the meaningful involvement of people in the decisions that affect them. In particular, the participation and prioritization of those most excluded and most in need are emphasized.

Because of their proximity to the people they serve and their responsibilities in key areas such as housing, public health, education, and planning (among others), local governments are critical human rights actors. As we point out in our paper, Human rights cities: The power and potential of local government to advance economic and social rights, not only are cities well positioned to champion human rights, they also have an obligation to do so. The provisions of treaties like the International Covenant on Economic, Social and Cultural Rights, ratified by Canada in 1976, “extend to all parts of federal States without exception or limitations.” This, of course, includes local government.

How would cities approach their challenges differently through a human rights lens, specifically one that focuses on long neglected economic and social rights? What kind of changes would this help to bring about?

Consider the example of the City of Toronto, which formally recognized the human right to adequate housing one year ago. The commitment requires the City to prioritize those most in need in decisions related to housing.

Other human rights-based planning and zoning considerations could also lead to more options for affordable housing. For example, allowing inclusionary zoning and ensuring it prioritizes deeply affordable units, which the market doesn’t provide, or even eliminating single family zoning, which produces exclusionary and discriminatory outcomes, could increase the supply of affordable homes and bring more people closer to better transit, more jobs, and important amenities.

Indigenous reconciliation represents another significant area of opportunity where a human rights approach can promote better outcomes. In Canada, approximately one quarter of Indigenous people in urban areas live in poverty, compared to 13 per cent of the non-Indigenous population. This inequality is systemic, built on years of intentionally exclusionary policies, and requires a fundamental reshaping of the relationship with Indigenous communities.

So imagine if cities were to meaningfully implement the United Nations Declaration on the Rights of Indigenous Peoples as a way forward (also a recommendation by the Truth and Reconciliation Commission). Such an approach would require local government to actively involve Indigenous people in “developing and determining health, housing, and other economic and social programs affecting them,” and to administer such programs through their own institutions.

But not all changes would need to be as momentous. There are smaller, yet profound, ways in which human rights can be enhanced at the local level.

For example, to increase dignity of families relying on student nutrition programs and ensure all children in need take part, cities could make such programs universal, rather than only targeting low-income students. Opening up access is crucial to decreasing the stigma associated with food programs, which advocates have identified as a key barrier to food access, considering only 1 in 5 people in need of food will actually use a food bank.

Well-intentioned programs also sometimes fail to reach the very people they are meant to support because they do not sufficiently account for the circumstances of those in greatest need.

For example, residents of Toronto’s Regent Park have had a harder time enrolling in free children’s recreational programming in their community because others with better internet access have been able to secure limited spots. A human-rights based approach to program delivery would have focused on the obstacles faced by the intended users of the programs – such as slower internet, fewer devices, and language barriers – to inform the design of the registration system. The Yonge Street Mission is supporting community-led work to resolve this very issue and ensure free recreational programming is more accessible to Regent Park community members.

In all, what these examples reveal are the kinds of issues, priorities, and solutions that rise to the top when we begin with a commitment to human rights. But this commitment must be meaningfully embedded within local government processes and systems – aspirational rhetoric will only serve to perpetuate the status quo.

As our paper suggests, cities and municipalities of all sizes can act to substantively respect, protect, and fulfill human rights by:

Reimagining and rebuilding our cities and municipalities on the principles of human rights is needed to ensure a more equitable recovery and future post COVID-19. The old organizing principles simply won’t do.

As Maytree embarks on a new program of exploration on human rights cities, we’re building on our organization’s long history of engagement on urban issues and poverty elimination. Along the way, we will be sharing our ideas and inviting you to participate in developing our collective understanding of how local government can advance economic and social rights to fight inequality and poverty.

We look forward to hearing from you.

Reimagining and rebuilding our cities and municipalities on the principles of human rights is needed to ensure a more equitable recovery and future post COVID-19. The old organizing principles simply won’t do.
Sign up for our newsletters