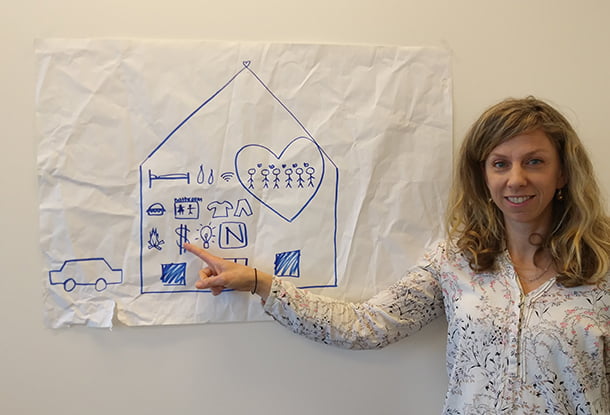 Late last year, as I listened to federal politicians and policy makers talk about the National Housing Strategy and the right to housing, I wondered how children and youth would understand this idea. How would they react?

While the right to housing is outlined in many international agreements (such as the Universal Declaration of Human Rights), it is still not necessarily a given in a Canadian context. Would young people think it surprising that we didn’t already assume that people in this country should be housed? And what does a house mean to kids? The Convention on the Rights of the Child alludes to housing as necessary for children (Articles 16 and 27), but I was curious as to whether young people would connect to the idea that housing is a human right.

With these questions in mind, I participated in a number of different classroom events this school year, talking to approximately 700 high school students in the Greater Toronto Area about human rights and housing. The schools ranged from large public high schools to all-girls Catholic schools, and the student group sizes ranged from 3-50. One of the projects was with the Youth and Philanthropy Initiative, with whom we partnered in four schools in the GTA in its innovative program connecting students to community involvement and activism. I also taught a mini-course at Ursula Franklin Academy, a social justice-specialized high school in the TDSB. Finally, I attended and led workshops on the right to housing at two high school conferences.

Young people are hungry for rights — they want to know more about the world around them, and about what they can do to make it a fairer, more just place. As I reflect on the past nine months, I realize that I was asking some of the wrong questions. Students intuitively understood that housing was a human right; the challenge instead was answering questions about why it is difficult for so many people to realize their rights.

I hope the young people I spoke to will keep a close eye on the national consultation on a human rights-based approach to housing that is underway until June 1. The proposals contained in the National Housing Strategy and the government’s discussion paper, as well as the process of consultation, all offer exciting avenues for students to understand, examine, and debate the key elements of a rights-based approach.

In the meantime, I hope teachers and schools will continue to engage young people on questions of human rights and citizenship. Building a culture of rights will require these ongoing conversations with young people on how to make rights meaningful in their daily lives.

Kate Butler is the Child Rights & Protection Advisor at Save the Children Canada. In this role, Kate is responsible for building capacity, developing material, and measuring & sharing what works as it relates to child rights, participation, and protection. She was previously the Lead, Human Rights and Learning at Maytree.

What do young people envision when they think of the right to housing? Kate Butler, Maytree’s Human Rights and Learning Lead, shares five things she learned from discussing the right to housing with high school students in Ontario.
Sign up for our newsletters