An object lesson in organizing for legislative change: Bill 148 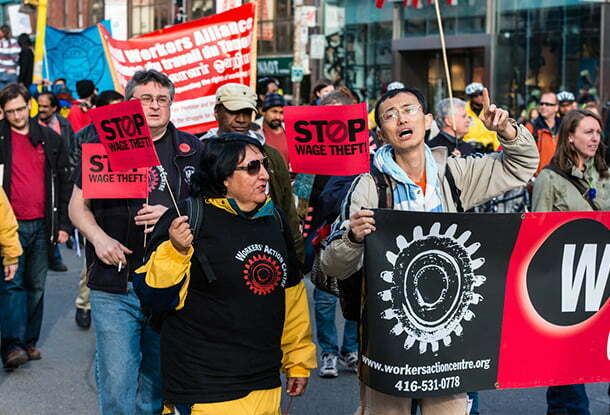 With the passing of Bill 148, the Fair Workplaces, Better Jobs Act, employment standards in Ontario will offer better protections for the province’s most vulnerable workers.

We are now, through our legislation, advancing the argument that employment for all workers should be tied to our fundamental social and economic rights such as decent work, income security, and health care. We are marking an important step by enacting laws that protect the right to decent work for all Ontarians and offer mechanisms to hold employers accountable when they are in violation of those laws.

This historic change could not have happened without the continued efforts of those very workers experiencing precarious and low-income employment. They have led a tireless collective movement to build public support and spur legislative change around worker protections.

The movement leading up to and in support of Bill 148 grew from years of worker-led advocacy on issues such as inadequate protections for part-time and temporary workers, disparities in pay, insufficient wages, and just-in-time scheduling. In response to these growing concerns, the Ontario government in early 2015 launched public consultations on the changing nature of workplaces, led by two independent experts. In the two years since, we have seen highly effective organizing from frontline workers’ groups, with broad-based coalitions holding demonstrations, mobilizing on social media, and forging popular consensus on the need for systemic change to protect workers’ rights. The new legislation is the direct result of sustained political pressure and campaigning by workers and their allies.

Many groups played a part in this multifaceted effort, and it’s important to highlight just a few examples of leadership. The Fight for $15 and Fairness, an Ontario-wide coalition of community organizers, health providers, faith leaders, unions, students, and immigrant communities created in April 2015, has been advocating for changes needed in six main focus areas: decent hours for decent incomes, paid sick days, workers’ right to unionize and organize, respect at work, rules that protect everyone, and a $15 minimum wage. To the credit of all campaigners involved, all of these have been addressed to various degrees by the new legislation, although some demands – such as two weeks’ scheduling notice, and employer liability for temp worker safety – are yet to be met.

The Workers’ Action Centre, a worker-based organization that advocates for better working conditions and provides information on workers’ rights, has been drawing attention to these issues for over a decade. It has produced essential policy papers and reports on the rise of precarious labour in Ontario, centering the lived experience of those dealing with income instability and poor protections, voices too often missing from policy discussions about work and poverty. In addition to providing policy recommendations, it has worked on grassroots organizing and leadership building among workers, and built alliances and mobilized support on university campuses, at Town Hall meetings, and in committee hearings. This has created opportunities for workers experiencing unstable, precarious, and dangerous work conditions to come forward, share their stories, and advocate for their rights.

United Way, in partnership with McMaster University, has conducted extensive research on the state of precarious labour in Toronto and the York Region for several years. Their joint efforts produced a groundbreaking study in 2013 that found half of all workers in the GTA in precarious employment, with inadequate protections and benefits. A follow up study in 2015 highlighted the urgency of implementing policy solutions on the matter, pointing to the effects of this growing precarity on the economy at large, as well as worker households.

It wasn’t just workers’ advocacy groups calling on the government to do its part. Progressive employers came together in the Better Way to Build the Economy alliance, arguing that higher wages and stronger workplace protections mean more productivity, a stronger economy, and better outcomes for all of us. Foundations, charitable and nonprofit organizations, and health providers voiced their support. The Atkinson Foundation was notable in its support, partnering with the Toronto Star in 2014 to create a work and wealth beat to cover issues relating to decent work and more equitable workplaces. In turn, Star reporter Sara Mojtehedzadeh’s consistent and incisive coverage on this beat was remarkable in underscoring the need for both stronger legislation and stricter enforcement of that legislation.

How will this new legislation move us closer to ensuring decent work for all Ontarians? It will see the minimum wage raised to $14 an hour starting January 1, 2018, and to $15 in January 2019. It will strengthen protections for temporary agency, part-time, and casual workers who will get equal pay for equal work, and fairer scheduling provisions. This would include a minimum of three hours’ pay for shifts that are cancelled within 48 hours of scheduled start time, as well as the right to refuse shifts that are scheduled without sufficient notice, i.e. within four days of that shift. All workers will be guaranteed ten personal emergency leave days and at least two paid, job-protected sick days, improving health, job security, and quality of life for the 1.6 million workers in Ontario who were not entitled to even one unpaid sick day.

For those in unstable, precarious, and low-income employment — many of whom are women, youth, migrant workers, and/or members of racialized communities — the bill will offer some reprieve from the stresses of erratic scheduling, insufficient wages, and work without time to care for themselves or family. It will move us closer to income security through employment, lifting many Ontarians out of poverty.

Bill 148 speaks to the tremendous and concerted effort that builds a movement, and its direct influence on legislative change. It is a landmark achievement for workers’ rights, and an object lesson in organizing from the ground up.

With the passing of Bill 148, we have moved closer to ensuring that the right to decent work is enshrined in our laws. And that historic change has happened through the tireless efforts of workers and their allies, who have led a movement to build consensus around worker protections.
Sign up for our newsletters