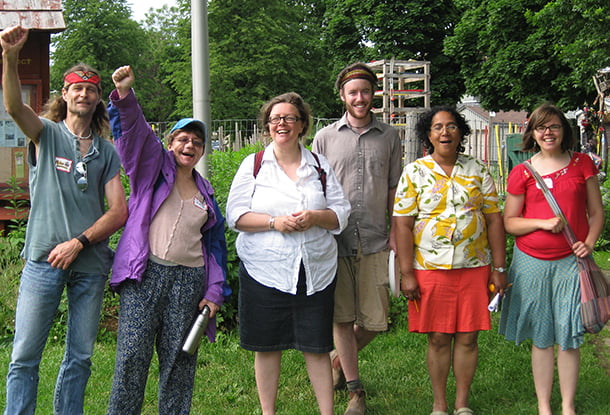 The Stop Community Food Centre may be renowned for offerings like our healthy food bank, community kitchens, and drop-in meals, but we know that charitable interventions aren’t a solution to chronic food insecurity in our city.

Instead, our mission is to increase access to healthy food in a manner that maintains dignity, builds health and community, and challenges inequality, while we advocate for the systemic changes and social policies that will have the most meaningful impact on public health and food security.

Since 2008, The Stop’s Community Action Program (CAP) has worked to leverage community power, raise political consciousness, and take direct action in support of a more equitable society. At its heart is the Community Advocacy Office, where trained advocates with lived experience of poverty and marginalization are hired to provide information, referrals, and support to their peers who are dealing with similar issues.

CAP was designed with a core philosophy of “Nothing about us without us.” But after twelve years of the program’s ongoing evolution, does it still live up to our vision of centering people with lived experience of poverty? Answering this question honestly requires careful attention to the concerns of advocates, and a critical self-assessment of our history and current context.

With funding from Maytree, we hired four current and former advocates as paid peer researchers to look back on the program’s history and chart a new course for its future. The ten-month research and evaluation project included in-depth interviews and focus groups with former staff and advocates, and it revealed both significant achievements and large gaps in our practices. In response to the researchers’ findings, we created a three-year action plan to improve equity and democracy within the program’s policies, practices, and culture, and will embark upon the plan in the new year.

In this interview with peer researchers Daisy D’Souza, Debbie Jenkins, David Baptiste, and Misty Parsons, we explore the importance of peer leadership in our sector, the groups’ experiences as community advocates, and the “grey area” that peer roles sometimes put them in.

Why do you think it’s important that social service organizations create opportunities for peer leadership and employment?

Debbie: Peers need an avenue to use and develop their true capabilities. And staff in the sector need to learn that peers aren’t anomalies of society, but people like themselves who never thought poverty would happen to them. Hiring us not only points to the value of our lived experiences, but it builds trust among the community members who come to us seeking a listening ear or guidance.

David: Imagine going to a welfare office and trying to talk to your caseworker. But before you start speaking, you feel you’re already being judged. When people know they’re speaking to a peer, they figure that you’re on their side and that you’ll do as much as you can to help them. They might open up more, and that means that you can really address their problems.

Debbie: It was eye-opening in many ways. Before, I believed that I wasn’t trying hard enough to succeed. I blamed myself and the decisions I’d made over the years for not having my “ducks in a row.” When I became an advocate, I knew from my own lived experience how to obtain the maximum benefits available to community members from OW [Ontario Works] and ODSP [Ontario Disability Support Program]. I also learned how to empower community members to build good relationships with their workers and reap additional benefits when applicable. In one case, I helped someone get $15,000 in back taxes written off by the CRA [Canada Revenue Agency].

Misty: When I was training to be an advocate, I was learning new things every day. I started to feel better, once I didn’t have to worry about when my next meal is going to be. I could afford one because I had a bit more knowledge of the system. Now, I’m trying to get out of the system by accessing education to upgrade my resume. That way, I can move up the ladder instead of continuously feeling like I’m “cha cha cha-ing.” You know, two steps forward, one step back. Since I’ve been with The Stop, I’ve been continuously stepping forward.

It’s hard to be willing to be part of society when you feel like society isn’t going to accept you. But if you ain’t part of the program, you don’t know what the program’s got. I’m reassured through my work as an advocate at The Stop that I’m accepted, because I can be out in public and people will come to me and say “Misty, I’m curious about blah blah blah,” or “Do you know how to access blah blah blah?” And I can help them.

What kind of life experience do you think someone has to have to become an effective advocate?

Debbie: Marginalization destroys a person’s core little bit by little bit. A peer at The Stop needs life experience knowing the struggle of living on an exceptionally low income and how it dehumanizes a person. These are experiences that our community members can relate to, and they enable trust in the relationships we forge in the Advocacy Office.

David: Good communication skills, listening skills, and the ability to organize people are important. So is experience of poverty, food insecurity, and navigating the systems of social assistance. If you’re dealing with drug addiction, someone that’s gone through that situation and recovered is probably one of the best people to talk to. Somebody that’s been there and done that, probably with some trial and error, can offer the best advice.

Daisy: I think what’s important is teamwork. To be able to work together to find good solutions for the problems that community members face. But you don’t need formal experience. If you’ve never worked before, you can learn things here—everything from handling calls to crisis intervention.

Advocates are considered “specialized volunteers” at The Stop and are paid an honorarium. This puts them in a grey area, as they’re neither permanent staff nor volunteers. What do you think of this model?

David: The benefits of being an advocate is that you gain knowledge of all the programs and benefits that are available at The Stop. But the shortcoming is that you see that you’re excluded from some of them. The advocates would like to have more say in the things that affect them, and that’s some of what they’re striving for.

Debbie: As rules became established over the years, staff made decisions without consulting the advocates. In that sense, the program’s goal of “meeting people where they’re at” became flipped around. Instead of the staff tailoring their work to the needs of advocates, advocates were tailoring their work to staff. There has been severe grumbling about the value of meeting middle-class people (staff) where they’re at, when the middle class is not the clientele we serve.

David: Most advocates are on some form of social assistance. They look at their time in the office as a means of supplementing their income. Many don’t want it to be supplemented too much. It might affect their social assistance, there might be clawbacks if they earn over a certain threshold. But what is the fair compensation? Is it enough for the complexity of the work they’re doing? What is the right amount? These are just some of the idiosyncrasies of being in the grey area.

If it hadn’t been for this research, this twelve-year [review] study, a lot of these issues may not have come out. We dug so deep and contacted so many people, that a lot of things that were buried way down came to the surface.

What did you find most meaningful about your experience working on the twelve-year review project?

Daisy: It gave the opportunity for community members to express themselves like never before. Many people had things just bottled up inside, they never had a platform to really vent out their feelings about the services we offer. The most surprising thing was that I was a part of it. I was really happy to have this opportunity, and to learn so much through the process.

Debbie: Now, there was indisputable evidence for what I’d observed during my five and a half years as an advocate—the data backed up what I’d been saying all along! I felt vindicated and deliriously happy that the report planned actionable activities for all of these findings and recommendations. Once I saw that, I gave the project my whole heart and soul.

David: I’m hopeful that the report will enable us to build a better program. Advocacy officially started in 2008, and we’re almost in 2021 now. To go back and see how it all started, through the different generations and the different struggles, I could see how much work went into getting us where we are now. This is meaningful stuff that was probably just taken for granted. Now, I’m looking to take it even further over the next five years!

Marial Addario is an Advocacy Placement Student at The Stop Community Food Centre.

Exploring the importance of peer leadership in the non-profit sector, the experiences of peers as community advocates, and the “grey area” that peer roles sometimes put them in.
Sign up for our newsletters