Recognizing the human right to housing for people living in encampments 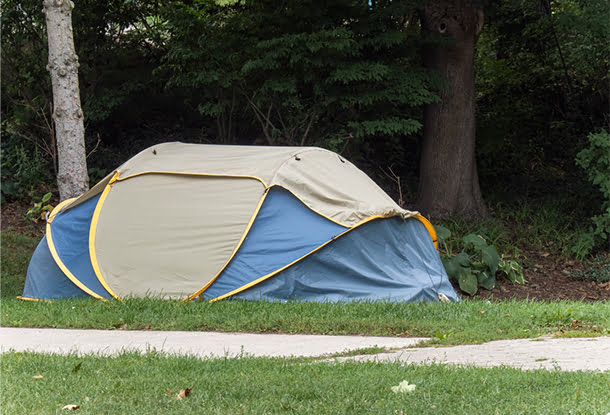 But maybe you should start to think that way.

In Canada, an estimated 235,000 people experience homelessness in a year, and over 35,000 people on any given night. These numbers are conservative, as they don’t count people who couch surf or stay with friends, and people who live outdoors such as those living in informal tent communities, often referred to as encampments.

“Homeless encampments threaten many human rights, including most directly, the right to housing,” wrote Leilani Farha, former UN Special Rapporteur on the Right to Housing and Global Director of The Shift, in a April 2020 report entitled A National Protocol for Homeless Encampments in Canada. The report outlines eight broad human rights-based principles that should guide governments and other stakeholders in adopting a rights-based approach in their response to encampments.

The COVID-19 pandemic has shown that such a response is desperately needed. The pandemic has led to an increased number of encampments across Canada, which have become much more visible and talked about in media stories such as Global News, CTV News, the Globe and Mail, and CBC.

In Toronto, the City estimates over 8,000+ people experience homelessness on any given night, based on a 2018 point-in-time count. Advocates say the numbers are now closer to 10,000 people each night – nearly one third of the Canadian estimates – and anywhere from 1,000 to 2,000 people are estimated to live in encampments.

Abdullahi Abdullah, known as AK, is a resident of Toronto’s Moss Park encampments. In an interview near his tent in the fall of 2020, AK explained that he had slept in Moss Park all through the summer, with minimal police intervention, preferring to sleep outside than in a crowded shelter risking exposure to COVID-19. But on September 13, 2020, around 10 p.m., officers came by to warn AK to take down his tarp and tent or they would take it down themselves. This confused him: “You’re gonna cut my tent because winter [is coming]? It’s windy. Raining. What is this?”

Feeling threatened, AK contacted the Encampment Support Network (ESN) and lawyer Leora Smith of the Community Justice Collective. All parties involved attempted to stop the officers from following through with their threats.

Despite an officer’s promise to Smith that nothing untoward would happen to AK’s tent, police returned to the site less than 24 hours later and cut the tent and tarp. They were caught on camera by AK’s neighbour, who was told by police to “mind your own business.” AK says he is lucky he wasn’t home when it happened.

Jeff Bierk, a volunteer with ESN, says Toronto Police cite the need for visibility to prevent overdoses as the reason for requiring tarps to be taken down. But this does not explain why the tent underneath the tarp was slashed all the way through to the inside – equivalent of an officer randomly smashing the window of your home.

Smith compares “illegally” camping in a park to “illegally” parking a car. “It doesn’t necessarily mean that just because the police believe [a car is parked] in an illegal place, that they can smash it up.”

Staying safe in an encampment is a human right

The first principle in upholding human rights in encampments is “Recognizing residents of encampments as rights holders.” Right to Housing Toronto (R2HTO) published the report Encampment Rights Review in September 2020, applying Farha’s Canadian level work to Toronto. While the R2HTO report commended the City for its inter-divisional approach, it also said “the City must immediately cease to treat encampments as by-law infractions or nuisances in the urban landscape” and highlighted B.C. court decisions that successfully challenged similar anti-camping by-laws.

AK laments, “[The police] make us out to be bad humans, like we’re going to do a crime.” Living in a tent may violate city by-law, but it is not a crime. “[Police] are supposed to support us people too.”

“If you want to say that a tarp is a by-law infraction, well that deserves a ticket, right?” Bierk asks rhetorically. “A by-law infraction doesn’t warrant someone to take the power of the law into their own hands and destroy someone’s property, whatever the context. There’s no context that justifies that. This is clear police violence…against people that are unhoused.”

Reframing what the human right to adequate housing means

The right to adequate housing has existed in the Universal Declaration of Human Rights since its inception in 1948, but it is only in recent years that the language of housing as a human right has become more prominent in housing policy such as in the federal National Housing Strategy Act in 2019, and the HousingTO 2020-2030 Action Plan in the City of Toronto.

But we’re still far from recognizing residents of encampments as rights holders. It is not only uniformed officials who have failed to do so. “[I heard] there were people coming down and setting tents on fire,” says Jaymie Sampa, Manager at The 519, a community center in Toronto. “I heard accounts from…the large encampment that was under the Gardiner [Expressway]… People would drive by at obscure hours of the night and throw things out their window at people. It’s vitriolic. It’s hateful towards people living in the encampments.”

When writing this post, the City of Toronto was not reachable for direct comment, but they shared a written response regarding plans for encampment evictions: “There are many examples of encampments posing significant health and safety risks, including to people living in them.” Safety concerns should not absolve the need for a human-rights based approach to encampments.

Steph Massey, Harm Reduction Supervisor at Parkdale Queen West Community Health Centre, encourages the public to “reframe their feelings of safety – of having housing, having access to preventative measures in a pandemic, having access to food – and then think about what that means for safety for someone living in a tent all year round.”

Amie Tsang is an occupational therapist in Toronto whose work focuses on health equity. She is a recent graduate of the Dalla Lana Fellowship in Global Journalism.

The COVID-19 pandemic has led to an increased number of encampments across Canada. Our response needs to be guided by adopting a human rights-based approach.
Sign up for our newsletters