Securing fair employment and income: Where Living Wage and the Fight for $15 and Fairness intersect 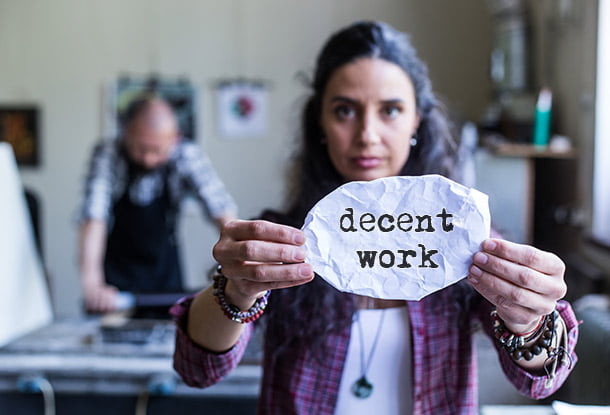 If adequately addressed, income security through employment can produce benefits and outcomes that cascade into other areas of a person’s experience of poverty and, ultimately, an escape from poverty. For example, we know that having secure employment that includes a full range of benefits and a possible career path, also known as a “Standard Employment Relationship,” is a key to escaping poverty (The Precarity Penalty, May 2015).

When an individual can secure sustainable employment that upholds their rights as a worker and pays a living wage, it is more likely that the individual will experience positive effects associated with economic independence such as increased opportunities for civic and community participation, stabilization of health problems, and even increased life expectancy.

Conversely, employment insecurity can have detrimental effects on the individual’s and/or household’s well-being and community participation.

The rise of precarious work in Ontario

It’s More than Poverty, a 2013 report from the United Way and McMaster University, concludes that:

Precarious work is on the rise for several reasons, mainly because the labour market has changed due to economic factors, technological changes, global competition and business restructuring (Law Commission of Ontario “Quick facts,” 2009).

In an effort to mitigate the effects of precarious employment and reduce its growth, movements like the Fight for $15 and Fairness and Living Wage are working to improve working conditions so that people can gain access to decent jobs, are protected at work and stay out of poverty.

The Fight for $15 and Fairness

The Fight for $15 is an international movement that advocates for a $15 minimum wage. In the United States, the movement has added components to push for paid sick days, unionization and fair scheduling.

In Ontario, it is has developed as the Fight for $15 and Fairness in response to the government of Ontario’s Changing Workplaces Review currently underway. This review of the Employment Standards Act and the Labour Relations Action is a once-in-a-generation moment that signifies an urgent and important opportunity to organize for decent work.

The Fight for $15 and Fairness is a provincial campaign with a coalition of community, unions, students, legal clinics, faith, health and immigrant communities coming together to push for legislative changes that will push against low-income and precarious work to help lift workers out of poverty. The campaign advocates for changes in six main focus areas (Fight for $15 and Fairness, “Demands,” 2017):

At the root of the Fight for $15 and Fairness campaign is the notion that decent work and stronger laws will better protect workers in our changing labour market. The movement has gained traction in the United States with fast food and retail workers, and the B.C. Federation of Labour and Nova Scotia have launched Fight for $15 campaigns.

Living Wage is an international movement that calls on private and public sector employers to opt in to a program that provides both direct and contract employees with wages that are sufficient to provide the basics to families with children. When families have a basic level of economic security, their financial stress may lessen and the likelihood of escaping poverty is increased.

A living wage is calculated as the hourly rate at which a household can meet its basic needs, once government transfers have been added to the family’s income and deductions have been subtracted. It reflects what earners in a family need to bring home based on the actual costs of living in a specific community.

For example, the recommended living wage for an individual working a minimum of 35 hours a week in Saskatoon is set at $16.77 per hour, whereas the minimum wage was recently increased by the Government of Saskatchewan to $10.72 and indexed (Ryan Kessler, Global News, 2015; Government of Saskatchewan, “Minimum Wage and Minimum Call-Out Pay”, 2016).

A living wage program can benefit not only the individuals and families working for a living wage, but the employers who opt in to the program, as well as the community as a whole. Here’s how:

According to Greg deGroot-Maggetti, People in Poverty Program Coordinator at Mennonite Central Committee Ontario, while the living wage takes an approach where employers are encouraged to voluntarily sign up, “these employer partners often become rock-solid champions for the living wage and for raising the minimum wage” and “their advocacy has helped build the business case around the economic benefits of higher wages.” He also notes that the Living Wage campaign works directly with employers who want to make sure that paid work is a pathway out of poverty, and “in most communities, the living wage rate is above the $15 minimum wage target of the Fight for $15 and Fairness campaign. So it provides a way for employers to go above and beyond legislated minimum standards” (2016).

Where Living Wage and The Fight for $15 and Fairness intersect

The Living Wage and Fight for $15 and Fairness movements, while seemingly different on the surface, are not so divergent when you compare their end goals: to secure fair employment and income for workers who might otherwise fall victim to precarious employment. Behind this notion is a call-out for decent work, which the International Labour Organization (ILO) defines as “opportunities for work that is productive and delivers a fair income, security in the workplace and social protection for families, better prospects for personal development and social integration, freedom for people to express their concerns, organize and participate in the decisions that affect their lives and equality of opportunity and treatment for all women and men” (International Labour Organization, “Decent Work,” 2015).

According to Deanna Ogle, campaign organizer with the Living Wage for Families Campaign, “we all have a role to play in addressing poverty in our community.” She argues that, ultimately, “work should lift you out of poverty, not keep you there,” whether through “a higher minimum wage [which] is the responsibility of the provincial government in addressing working poverty,” or “a living wage [which] is the opportunity for employers to set a higher standard and ensure that all direct and contract staff are able to meet their costs and actively participate in their communities” (2016).

Earlier this year, Vibrant Communities came out with a new Game Changer approach to poverty reduction that was informed by the ideas and experiences of Cities Reducing Poverty members who lead local poverty reduction initiatives across Canada. We define poverty reduction Game Changers as “areas and strategies that elicit an array of positive, significant, and cascading outcomes towards reducing poverty.” Income security through employment was clearly established as one of the first game changer strategies since access to secure employment that pays a living wage and upholds workers’ rights is, in fact, game changing for many individuals, their families and even society at large.

As Ontario conducts its review of the changing nature of the workplace and intends to make legislative changes to the Ontario’s Labour Relations Act (1995) and Employment Standards Act (2000), there’s no time like the present to show your support for movements like the Living Wage and Fight for $15 and Fairness. To learn more and for information on how to get involved, visit one of the links below:

Internationally, and across Canada, the Fight for $15 and Fairness and Living Wage movements aim to improve working conditions so that people can gain access to decent jobs, are protected at work, and stay out of poverty.
Sign up for our newsletters