Skate lending, mini pizzas, and a community hub – how Dufferin Grove Park built a skating community for everyone 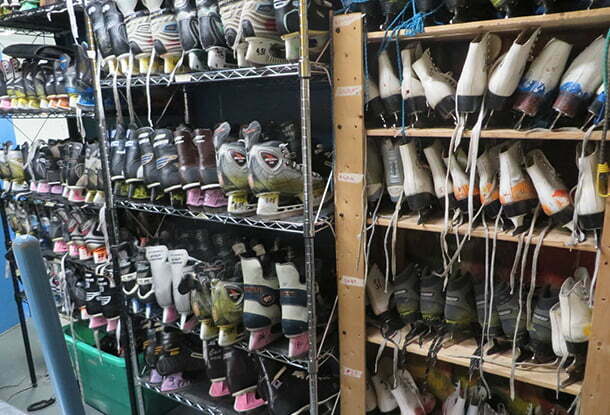 Twenty years ago, a rink change room in Dufferin Grove Park, used only for about three months a year, began to be converted into a small year-round neighbourhood clubhouse. This happened without a middle man or architect. The conversion took place as small grants became available – step-by-step and piecemeal, and as useful changes suggested themselves to park users and on-site city rink staff. The total cost was about $51,000.

As we made the changes, this single-use rink house acquired new possibilities. Until then, the building had been designed for a single purpose – skating – and even that function was given its narrowest possible range. Skaters were meant to come into the building and change from shoes to skates. They would go outside and skate, then come back inside to change into shoes and leave.

We started by taking out a wall between two small rooms to make a big room, and changed the staff office into a little kitchen. Maytree gave us $3,000 for a woodstove for the main room. Once it was in place, people came into the rink house and sat down with their friends, talking and drinking hot chocolate and slowly getting their skates on.

Out on the ice, youth played shinny hockey for hours. When they got hungry, they went back inside and ate mini pizzas or soup. Parents sat in front of the woodstove with their children, reading them storybooks.

A group of old Italian men –  retired construction workers –  played card games for hours, and got their coffee for free, “since we worked so hard building this country.” Sometimes musicians brought their instruments, using the echo-y concrete block walls to good effect.

There was enough room to fit in a farmers’ market eventually, when it was too cold to have it outside along the path. On market days, the Zamboni was parked out on the basketball court, to make room for more farmers in the garage.

Setting up a skate lending program

We were astonished at how quickly the rink changed. Immigrant newcomers of all generations and cultures, it turned out, liked skating, and even playing shinny. They just didn’t have the money to buy skates and the rest of the equipment. Tibetans, Vietnamese, Brazilians, Peruvians, Cubans – all of them got out on the rink, with the borrowed equipment. Many stayed to eat and chat and make new friends afterwards.

It cost $2 to get a pair of skates. For kids who didn’t have a toonie, 15 minutes of picking up litter inside the rink house would earn them a skate loan and a mini pizza. Even at the two-dollar-fee, the skate loan program paid for itself. After a few years staff could buy a portable skate sharpener – portable because, by 2010, the skate lending program had expanded to two nearby rinks.

The city puts on the brakes

With the help, again, of the NHL Players’ Association and a friendly foundation, we assembled an “event collection” of skates, sticks, helmets, and gloves and offered it to councillors citywide if they wanted to put on outdoor rink events. But it turned out that recreation management had resolved not to spread skate lending further. Few councillors were interested once they found out that recreation management was not going to help at such an event.

Finally this year we decided it would be better to just give the whole 110-pair collection to one other city rink. But even with a ready-to-go skate collection, recreation management said no. They said that the city didn’t have the money or staff resources to run such rink programs, that skate lending was risky, that it’s not part of the city’s “core function.”  This after twelve years of their own staff running a successful self-supporting program at three rinks!

We made a poster to put up on rink bulletin boards, asking skaters to “put their heads together with rink staff to figure out how to make it work.” The city denied us permission to put up the poster. It seems new programs must come from the top, not from frontline staff and citizens.

In 33 years of working in public space, this is the most rigidity I’ve seen about the “core functions” our taxes are meant for. I can only hope that the pendulum will swing back.

Maybe more city staff and councillors should experience how lively an outdoor rink can be, and how it has become a wintertime neighborhood meeting place. They should make their way to one of the three rinks in the next few days – they’re always welcome.

Jutta Mason is the administrator of the Centre for Local Research into Public Space (CELOS) and a Jane Jacobs Prize recipient.

Twenty years ago, Dufferin Grove Park began to convert a small rink change room into a community hub. Now there’s a skate-lending program for just $2 and an inclusive skating community.
Sign up for our newsletters