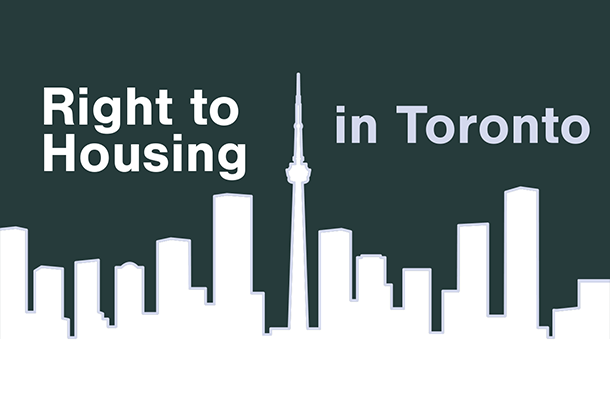 The City of Toronto could adopt a rights-based approach to housing by the end of the year.

With HousingTO 2020-2030 — the City’s next ten-year housing and homelessness plan — in development, a group of over 60 individuals and organizations comprising housing advocates, community health centres, and non-profit organizations are coming together to call on the City to commit to a rights-based approach in its new plan. If the campaign — called Right to Housing Toronto — is successful, the City will have a new framework for housing policy that could transform outcomes for residents. And Toronto would join the ranks of “human rights cities” like Barcelona and Seoul that are adopting rights-based strategies to address the causes of homelessness and poverty.

We spoke to Alyssa Brierley, Executive Director of the Centre for Equality Rights in Accommodation (CERA) and member of Right to Housing Toronto.

Q: What is the Right to Housing Toronto campaign, and who is part of it?

The Right to Housing Toronto campaign is a large and growing group of organizations and individuals that have come together to advocate for Toronto to adopt a rights-based approach to its next ten-year housing plan. We’re asking the City to recognize and implement the human right to adequate housing. In a rights-based approach, the human right to adequate housing is a guiding principle that also provides concrete tools that the City can use to address the housing and homelessness crisis.

In terms of who is part of the group — it’s a larger group of about 60 individual and organizational supporters so far. We have folks from the housing sector, the human rights sector, the social services sector, and housing advocates in the city of Toronto. There is a core group involved in the day-to-day work of the campaign — that includes CERA, ACORN, the Advocacy Centre for Tenants Ontario, the Federation of Metro Tenants’ Associations, Emily Paradis, Joy Connelly, and Maytree.

Q: What specific things is the campaign calling on the City to implement as part of a rights-based approach?

What we’re talking about is the idea that people’s homes must be affordable, habitable, accessible, secure, culturally appropriate, have necessary infrastructure (so things like safe drinking water, heating, affordable power, communication technology), and be located close to things like employment services and amenities. With that in mind, we’re asking the City to recognize housing as a human right first and foremost. We want them to incorporate rights-based decision-making into the work they do. We want them to coordinate their governance and actions as they relate to housing; to create goals, targets, timelines, and mechanisms in order to accomplish the objectives of the housing plan; and to have transparent and evidence-based monitoring so that it can be clear to what extent they’re meeting those objectives, and that progress is being measured based on clear evidence.

We’re also emphasizing rights-based participation and leadership. This means making sure that folks who are impacted by homelessness and housing precarity are around the table and are playing a meaningful role in the decision-making and designing of policies that are going to move this forward.

The final element is including accountability mechanisms to make sure that there is a way for the City to be held accountable in a way that is different from the tools that exist right now because we know those tools aren’t working.

Q: How will the City adopting a rights-based housing plan affect Torontonians?

We’re in a housing crisis now that is affecting people throughout the city in various ways. It’s affecting the most vulnerable and marginalized in a particularly catastrophic way. A rights-based plan affects Torontonians very directly because it puts people at the centre of the thinking and the decision-making and the planning. And it really does prioritize the impact of the City’s actions on people, especially those most vulnerable to housing precarity, which is not something that necessarily comes to the forefront in the way that decision-making happens now.

To use an example — it’s often the case that certain housing projects can generate some opposition in communities for all sorts of reasons. If you take a human rights-based approach to making those decisions, you would privilege the fact that there is somebody who needs a roof over their head; on the other side is someone who might be concerned about things like property values or the character of the neighbourhood. What a rights-based approach would encourage is the prioritization of someone’s need to have a roof over their head and to fulfill their right to live in dignity over somebody’s concern about property value. It would also require the same kind of prioritization of rights at the level of policy development at the City level.

Q: Why is this campaign happening right now?

It’s happening right now for a couple of reasons. We’re in the midst of a housing and homelessness crisis that just keeps getting worse. Every year the numbers point to increasing disaster in the area of housing. Last year we had close to 10,000 people sleeping on the street according to the official statistics compiled by the City, so we know that number is actually much higher, especially given the hidden homelessness of particular communities, including women and refugee claimants. The system is reaching a breaking point; you can’t walk around the city without seeing the implications of this housing crisis. It’s incredibly visible.

The other reason it’s happening right now is because there is some momentum for this with Canada having passed the National Housing Strategy Act in June of this year. This is the first legislation in Canada that has recognized the human right to adequate housing; it takes concrete steps to realize that right, including the creation of some of those accountability mechanisms I referred to earlier. That being said, a lot of what needs to happen in realizing the right to adequate housing has to be implemented at the local level. And Toronto is in the process of developing its next ten-year housing plan. So this is the time. If there is going to be a rights-based approach to housing in the city of Toronto, this is the time to make that happen, while they’re creating this housing plan that sets out what they’re going to do for the next ten years.

Q: What’s going to happen in the next few months?

We’ve provided a submission to the City outlining what we think should be part of the plan. The Housing Secretariat is working to finalize the housing plan; at this point, we understand it will be presented to the planning and housing committee for their consideration (and hopefully approval) on November 13. Then from there it goes to City Council for final approval. So what we’re really focused on for the next few months is making sure that the City understands what a rights-based approach to housing means and that there is broad and strong support for taking this approach to the next iteration of the ten-year housing plan. We have a really short window to be able to do that. We’re trying to generate as much support as we can.

Q: What can our readers do to support the campaign?

We’re asking people to sign up as a supporter on our website so that we can have the ability to show the City how many organizations and individuals are supportive of this approach, and we’re hoping that we can get a significant number of supporters between now and the approval of the housing plan in November.

We also have a Twitter account. We’re trying to be as active as possible on social media and make sure that there are many positive conversations about the right to housing and its importance in Toronto. So certainly following the campaign on Twitter and re-tweeting the content and adding voices of support on social media would also be helpful. Your readers should also consider reaching out to their City Councillors to let them know that they support a strong rights-based plan.

Read more about Right to Housing Toronto on the campaign website.

A group of over 60 organizations and individuals are leading a campaign for the City of Toronto to adopt a rights-based approach to housing. Here’s what you need to know.
Sign up for our newsletters