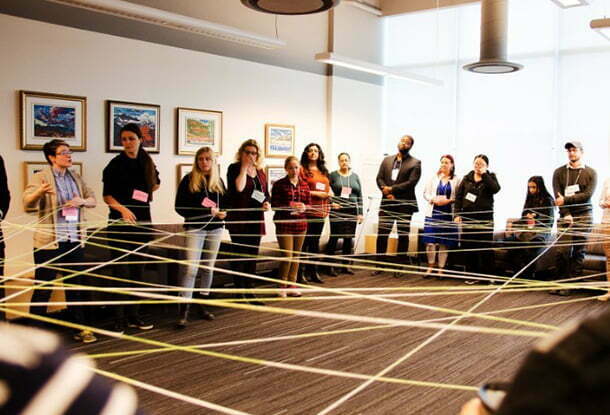 At a high school in Toronto, a group of students is working on creating a social safety net – quite literally.  Within the fictional community they’ve created in their interactive workshop, the students are matching community members facing challenges to their rights with social services that address those challenges. Each student must make a connection and explain their choice, passing the length of a ball of yarn from person to person. The threads cross and weave, forming a support structure connecting all members of the community.

During the exercise, the group also considers threats to the safety net they have just created. Facilitators demonstrate this by asking students to drop their threads if, say, their service no longer receives government funding. As the government funding — and with it, the service — falls away, the social safety net starts to unravel.

The interactive workshop is part of a pilot partnership between Maytree and the Youth and Philanthropy Initiative (YPI), a public charitable foundation that works to grow compassionate communities by connecting high school students to social issues and local charities. Every year, YPI empowers high school students to develop a deep and nuanced understanding of social issues, cultivate a range of critical skills, and become key decision-makers in their communities. The pilot program, starting with four schools in Toronto, is adding a new dimension to YPI’s model: building a culture of human rights among participants. That means approaching social issues as a matter of human rights that are being violated or unmet, exploring a different foundation on which to build civic engagement.

Students in the pilot program will learn the fundamentals of a rights-based approach: recognizing the rights inherent in all human beings, regardless of ability, race, religion, gender, immigration status, income level, or housing status; and understanding the collective responsibility of individuals, government, businesses, and civil society at large to ensure the fulfillment of those rights.

YPI’s program is centered on experiential and project-based learning and enables high school students in grades 9 and 10 to provide funding to a local community organization of their choice. This year, YPI is working with 100 schools across Canada, and for every participating school, YPI provides a grant of $5,000; the students decide which charity receives that money.

As part of YPI, students identify different social issues they’d like to work on in groups. Once they have identified the social issue, the students find a local charity offering social service programming to address that issue. The next step is setting up a meeting with the organization’s staff and volunteers to learn about programs, goals, and challenges. Back at school, each group delivers a ten-minute presentation on their social issue and the organization they’d like to support. The best presentations from each class advance to a school-wide final, where a student-led panel decides which charity receives the grant.

Teachers and students say YPI animates the school curriculum and fosters civic engagement. Students learn in and from their communities, and gain valuable skills in research, critical thinking, communication, collaboration, and ethical citizenship. Often, an issue that has only ever been an abstract idea in a Civics reader suddenly becomes a tangible set of circumstances affecting real people.

“The impact of YPI goes beyond learning outcomes and the YPI grant,” says Kate Gatto, YPI’s National Program Director. “Every year, we hear about students for whom YPI was a catalyst for civic engagement.” For many, the transition from textbook to real life serves as strong motivation to take action, and not just for the duration of the project. Many students stay involved with their local charities through volunteering and fundraising, and some even go on to start their own initiatives.

This year, with the integration of a human rights component through the pilot project, YPI is hoping to embed a culture of human rights in the YPI curriculum. Students will be encouraged to connect the subject matter they study in school to real-life scenarios in their own communities. They’ll get to ask questions such as: What human rights are being violated in the issue at hand? Whose rights are being privileged over the rights of others? Whose responsibility is it to ensure that all people have their rights met?

The interactive workshop is just one aspect of the pilot, and has been modified from a core YPI activity at participating schools. As with other YPI schools, teachers in the pilot receive a comprehensive package of YPI curricular resources, including a seven-part guide with assignments, activities, and worksheets. YPI and Maytree also deliver an opening presentation to each participating class, outlining the principles of a rights-based approach and encouraging students to think about human rights at every stage of their projects.

A variety of non-profit organizations have received support through YPI – from disability support services (the largest share of YPI grantees in 2016/17), organizations combating gender-based violence, to services for people in conflict with the law. Student decision-making is often responsive to shifting political and cultural realities. Last year, an organization serving refugees, specifically those without legal status in Canada, won at three different schools; from 2015/16 to 2016/17, following the publication of the report of the Truth and Reconciliation Commission, YPI has seen a doubling of grants directed at organizations serving Indigenous communities.

With the pilot program in its first year, the YPI and Maytree teams are looking forward to seeing how students will bring a rights-based approach to their final presentations. It is their hope that the focus on human rights will reinforce the social justice element of YPI’s work, encouraging even more action and engagement from students.

“The students will realize that the rights they’ve studied in school are directly relevant to real people in their city,” says Kate. “Real people fighting for their rights and the rights of others, on the ground, every day.”

Every year, a post-program student survey asks participants if they shared their YPI experience with people outside of class. On average, students report having told eight people about the program; this year, an estimated 4,250 people outside of the pilot will learn about social issues. Click here to read YPI’s Impact Report.

Every year, YPI empowers high school students to develop an understanding of social issues and become key decision-makers in their communities. Now the organization is adding a new dimension to its model: building a culture of human rights to deepen student engagement.
Sign up for our newsletters