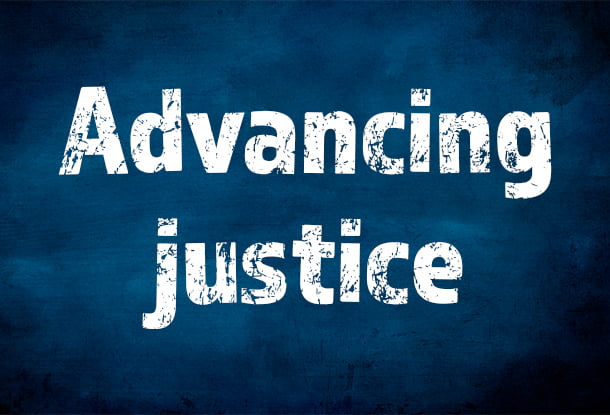 This article is the introduction to our series, “Advancing justice,” which explores the relationship between human rights, poverty, racism, and the criminal justice system. It’s written by the members of the editorial board.

The full breadth of our human rights are at issue in the criminal justice system. Though most commonly associated with civil and political rights, this system – from policing to courts to incarceration – is intricately tied to our economic and social rights. When our social systems fail to protect or fulfill economic and social rights, they create and recreate poverty, giving rise to and deepening cycles of marginalization and vulnerability. This is exacerbated by systemic racism. These systems create harms that manifest in the lives of individuals, families, and communities, and are often experienced across generations. The harms can be devastating, long-lasting, and even lethal. Poor and racialized people are disproportionately harmed.

When systems leave families and communities vulnerable, the impacts are many and interconnected, including inadequate housing, insufficient income and precarious employment, poor nutrition, inadequate community services and health care, poor health and educational outcomes, and disengaged youth. Canadian census data clearly demonstrates that Indigenous, Black, and racialized communities are disproportionately represented in low-income groups. Research further indicates that such overrepresentation stems from Canada’s own history of racism and colonialism.

Families and communities who cannot access their economic and social rights are more exposed and are more deeply harmed by any shock that society must contend with. The COVID-19 pandemic with its various waves is a glaring example: the differential impact that the pandemic has had on racialized communities has been well documented, as has the need to target pandemic and vaccine responses to “hot spots” – code for impoverished, poorly served, and often racialized communities with high rates of infection.

But while the inequitable impact of COVID-19 and pandemic responses are clear and present examples of how poor and racialized communities are disproportionately impacted, it is sadly only one example of many. The pandemic has been almost impossible to ignore; but other, more insidious, manifestations of inequity and systemic racism exist in our Canadian society and need to be exposed.

Systemic racism embedded in the systems that are ostensibly in place to support and protect vulnerable families and communities, such as social assistance and child welfare, often results in over-surveillance and over-monitoring. The lives of poor individuals and families are constantly under the microscope of the state and its agencies. Similarly, police services that are in place to “serve and protect” the community are particularly guilty of over-surveillance of members of Indigenous, Black, and racialized communities.

Racial profiling by police is often the first point of contact of these individuals with the criminal justice system. Many reports have documented the greater likelihood of Indigenous and Black individuals being arrested for minor crimes than their white peers. As a result, we witness higher percentages of Indigenous and Black people in Canada’s criminal courts and prison systems.

Furthermore, there is a greater possibility that Indigenous, Black, and racialized people will be taken to the police station, held, and charged even for minor crimes, as opposed to being let go with a warning. Recent reports from the Ontario Human Rights Commission have used data to corroborate this lived experience of discrimination against racialized communities on the part of police in Toronto.

While those with financial means and social connections have ready access to the resources they need to navigate the complexities of the criminal justice system, individuals living in poverty, especially Indigenous, Black, and racialized people, often do not. These realities are compounded by the fact that many who live in poverty both perceive the justice system as inaccessible, and are often unable to afford legal representation. Accessing legal representation is often an insurmountable challenge for those living in poverty, leaving individuals and families vulnerable to the machinery of the criminal justice system.

Once arrested, people living in poverty and racialized individuals have difficulty accessing bail. If granted bail, they typically have more conditions, even though access to reasonable bail is guaranteed in the Canadian Charter of Rights and Freedoms. The bail system in Canada relies on sureties (individuals who act as guarantors that bail conditions will be upheld) that further increase barriers for people who live in poverty. The result is more Indigenous, Black and racialized people are held in remand – that is to say, they are kept in jail – until their trial. They can be held in remand for long periods of time, even years, and unlike those convicted of a crime by the courts, they are held without any entitlement to programming and without any assistance when released. This means, potentially, interrupting and threatening their already precarious employment and housing, a deeper fall into the experience of poverty, and straining family and community life.

Research has further shown that people held in remand are more likely to falsely plead guilty to the charge, or a lesser charge, to gain freedom without fully appreciating the far-reaching impacts of such decisions, including limitations on future employment opportunities. These experiences are direct contraventions of the expectation that people are treated as innocent until proven guilty.

The need for accountability and change

Given the destructive consequences that such encounters with the criminal justice system can have on individuals, their families, and communities, and given our awareness of the inequitable impacts of these experiences on people living in poverty and Indigenous, Black and racialized communities, it is clear that there is a critical need for change. These are not new problems; they have existed for decades.

Analysis of and open discourse about the interface between poverty, human rights, and the criminal justice system can lead to innovative solutions. In addition to policy and legislative changes, we require transformation in practice and organizational culture to reduce the human rights violations that are producing harmful and even tragic consequences across Canada.

The criminal justice system is complex. Among the institutions that comprise the system are police organizations at the municipal, provincial, and federal level; courts, judges, and lawyers; and, of course, the federal and provincial correctional (i.e. prison) systems. The criminal justice system also includes organizations providing various services, such as legal aid, community programming, and support services for individuals, families, and victims. The ways in which these various bodies interact with each other, both from policy and legislative perspectives as well as in day-to-day practice, is complicated.

Governance and accountability within the criminal justice system are intrinsically challenging given the various orders of government involved as well as the various departments and practitioners involved in policymaking, funding, legislation, and service delivery. Nevertheless, the pressing need for change in the criminal justice system to address issues of poverty and racism demands innovation and urgent transformation; we need to understand how change can be achieved, who needs to be part of the change, and who should be held accountable.

Exploring the interface between human rights, poverty, racism, and the criminal justice system

In this new series, Maytree will explore the interface between human rights, poverty, racism, and the criminal justice system by inviting various researchers, practitioners, and those with lived experience to deepen our understanding of the issues. The series will explore themes including the historical roots of the present-day realities, the challenges associated with the lack of race-based data, issues specific to Indigenous communities, lack of access to justice, as well as potential solutions and promising practices.

Many voices and researchers are currently addressing the issues of systemic racism and the criminal justice system. This series is not intended to replicate those important efforts. Instead, Maytree hopes to contribute to this important dialogue by exploring, specifically, the interconnected experiences of poverty, human rights, racial discrimination, and involvement with the criminal justice system.

We hope you will join us on our journey and engage with us in this important conversation.

The criminal justice system – from police to courts to prisons – is intricately tied to our economic and social rights. Failure to fulfill these rights creates poverty, giving rise to and deepening cycles of marginalization and vulnerability. All this, of course, is exacerbated by systemic racism. In “Advancing justice,” researchers and practitioners will explore these issues as well as potential solutions and promising practices.
Sign up for our newsletters