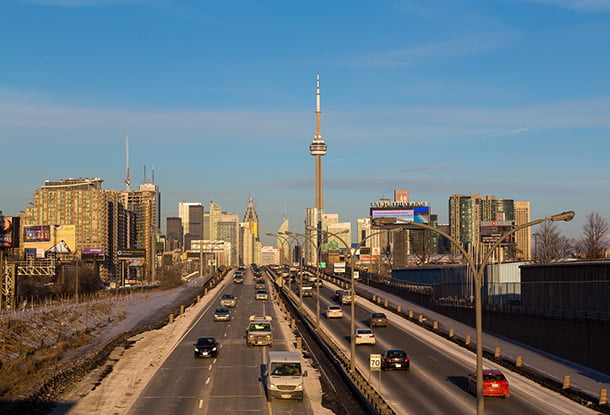 Last fall, Toronto Mayor John Tory demonstrated some political courage in proposing road tolls on the city-owned Gardiner Expressway and Don Valley Parkway as a source of revenue to pay for needed infrastructure improvements. In his political leadership on the file, and in the support of Toronto City Council for the decision, there was a real hope that the move represented a long-awaited shift in conditions to put municipal finances on a sustainable course.

On Friday, January 27, a roadblock emerged in that path as the Ontario government reversed its support for the city’s plan to implement tolls, promising instead an increased share of provincial gas tax revenues to Toronto and nearly 100 other municipalities.

Cities are often referred to as a “junior” level of government in Canada, or more disparagingly as mere “creatures” of the province. But since our governmental division of labour was designed at confederation, cities have grown dramatically. Their needs have become more complex and local governments have been expected to adapt and respond.

Responsibilities for housing, social services and major infrastructure have been downloaded both formally and informally by provincial governments to cities. What hasn’t come along with those responsibilities is the tools at the local level to raise the revenue to pay for them. As a result, some important city needs have been left unmet, while others have been patched with inadequate and unsustainable solutions.

The responsibility for our current situation is spread across multiple administrations at the local and provincial level. But Mayor Tory’s leadership and Council’s decision to introduce a new revenue tool was an important step in the right direction. Canada’s cities need the ability to exercise local governance, accountability and revenue tools in order to meet local needs and build strong, inclusive communities.

Road tolls alone would not have provided the funding that Toronto needs to ensure a strong city that works for all of its residents. The continued loss of Toronto Community Housing homes to neglected repairs is tangible evidence of a larger need. But for those same reasons, an increase in gas tax funding from the province is not a replacement. Cities need both increased funding from the gas tax to meet responsibilities downloaded by the provincial and federal governments as well as to introduce their own tools to fund their policies and programs.

Our “junior” level of government is now grown up and wrestling with significant and complex challenges. People can disagree about whether road tolls are the best way to raise revenue for Toronto’s needs, but if we want to encourage healthy municipal finances, we need cities to manage their own choices in the local political arena — whether building consensus with neighbouring municipalities in the region or justifying their decisions to local voters.

Given their modern responsibilities, cities need more reliable, diverse and consistent streams of revenue. As a general principle, democratic accountability is best served when governments are in a position to raise the revenues that they spend — so that they can be accountable directly to their citizens for how decisions are made. By promising gas tax revenue instead, Ontario’s provincial government has sent the message to municipalities that when they have other needs in housing, public health or other local services, they should be going to the province to ask for money rather than finding their own solutions. That is not a recipe for strong cities.

It happens that in this case, road tolls on the Gardiner Expressway and Don Valley Parkway would also be entirely consistent with provincial policy direction. The province is developing a system of High Occupancy Toll lanes that aim to help manage congestion by tolling provincial highways, and began tolling two new stretches of provincial highway in the Greater Toronto Area on February 1.

But whether the provincial government favours the policy should not be the main issue here — it’s whether we have strong cities that can make the difficult local decisions and implement the policies they need within their own jurisdictions to meet the needs of their residents.

While some municipal leaders from around the GTA were not happy with the road toll proposal, none should be celebrating, even if the short-term result is more provincial funding for their city budgets. Across the country, we need to empower our cities to have the governance, accountability and, yes, revenue tools to make decisions about their needs at the local level.

It would be fitting if, as Canada celebrates its 150th birthday, cities were no longer relegated to the kids’ table.

We need cities to manage their own choices in the local political arena.
Sign up for our newsletters