How do we bring human rights into the classroom? 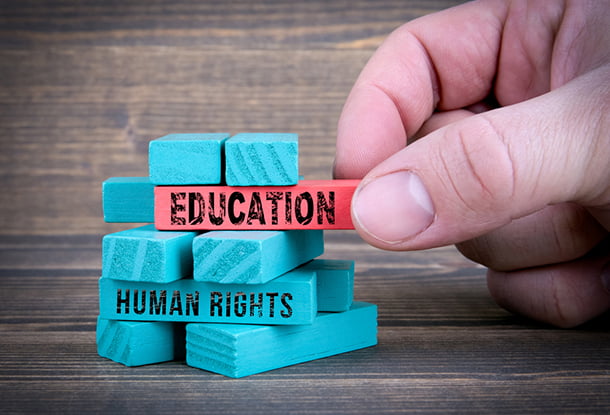 For many of us, the classroom is the first place we hear about human rights. It’s at school that we learn about the right to vote, the right to be treated with dignity, and the right to practice our religions.

But how do educators get ready to teach about rights?

Here’s what they had to say about bringing human rights into the classroom.

Personal identity is a catalyst for interest in human rights

Many educators I spoke to described how they became interested in issues of human rights and equity through their backgrounds and experiences.

One teacher’s experience growing up as a racialized woman influenced her decision to become an educator, in part so she could talk to young people about these issues, and illustrate the problems with the education system. She noted:

(As a teenager), I was a huge fan of Tupac and thinking about his struggles. I remember thinking about how he got jailed and got a police record for jaywalking. And, as a thirteen-year-old, I thought about how unfair that was and what was wrong with our system. And then when I was fourteen, Reena Virk was murdered by her classmate, and I was the same age as Reena Virk. And she was South Asian. I am also South Asian, so that really hit home.

For some educators, social location meant that they had experienced discrimination and racism, and that this was a motivating factor in their work. One Black educator worked at a school that was very homogenous and relatively well off. As a woman of colour, she felt as though parents, students, and teachers saw her differently than other educators, and so she had to keep defending and defining herself to others. “Every time I come (to school), I have to explain who I am,” she said.

Personal identity seemed to be a strong motivator for teachers in including lessons about human rights in the classroom. When teachers are personally motivated and interested in human rights, it’s more likely that their students will have the opportunity to learn more about what rights are, and why they matter.

Many of the educators I spoke to were influenced by the Truth and Reconciliation Commission’s (TRC) Calls to Action. They felt that human rights education was intricately connected to reconciliation and Indigenous curricula, and that teachers had a responsibility to follow the TRC’s recommendations:

The Truth and Reconciliation Commission has mandated, “Here are things to address in education.” But educators aren’t required necessarily to follow it. In English, my curriculum is reading and literature studies, writing, oral communication, and media. No establishment of texts, no discussion of, “You should talk about diversity. You should pull writers from this or that.” None of that is addressed or suggested. So TRC makes recommendations about how we can reconcile the populations within Canada. It’s up to teachers to do it.

Another teacher noted that he came to Indigenous teachings because he wasn’t seeing them reflected in the current material:

I came to it through a number of different roles. About 10 years ago, I started getting very much into First Nation, Métis, and Inuit education and looking at opportunities to include more of the true history of our relationship and the Nation to Nation relationship into my teaching. It finally dawned on me at that point that I’d been teaching from a dominant narrative for so long in all facets of the way I taught and really wanted to start exploring other ways of knowing and other things.

Educators I spoke to felt that they had personally learned a lot about Indigenous perspectives through their work and that this was increasingly being recognized in the material. Those who worked as coaches also mentioned that they were aware of, and sometimes doing, work that supported reconciliation, like sharing resources related to Indigenous rights.

If we are to see an even greater recognition of the importance of reconciliation, further integration of these calls to action into the curriculum should continue.

There was a widely shared sentiment that there were not enough resources on rights. Only one teacher disagreed with this statement – he felt that the resources existed, but that teachers did not always know where to look. Most teachers agreed that finding and creating resources on something new to them, like human rights, required a lot of independent time and effort.

Many of the teachers also suggested that it was not just English and Social Studies teachers who needed to be included in questions about learnings and resources. One of the teachers noted that she needed human rights resources for teaching in French. Others were able to find connections to rights in subjects like math, but again struggled to find the necessary resources to teach effectively.

One math teacher told me that he tries to get his students to see that they can use math to “do good” — for instance, he recently did a project with his students where they used algebra to plan a power grid for an Indigenous on-reserve community. However, he felt he had to create the materials from scratch, and did not know if others were doing similar things.

Given the dearth of resources, some teachers mentioned turning to social media to find resources and like-minded individuals working on rights. Many teachers also noted using websites like Facing History, Facing Ourselves, or the Ontario Human Rights Commission material, but noted that they often had to adjust the material to make it relevant to their students’ lives.

The teachers I spoke to saw change as something that needed to happen at a number of different levels, including the Ontario College of Teachers, schoolboards, and the Ministry. Every educator had ideas about how the educational system could do a better job of both teaching human rights to students, and fulfilling students’ rights.

Many teachers believed that government priorities played a big role in shaping the possibilities for education and commented on the current political environment in Ontario, including the adverse effects of proposed cuts to the Ministry of Education.

But it was the school-level itself that received the most focus in identifying how to better implement human rights education.

School administration was widely seen as both part of the problem and part of the solution. Some noted that although school boards were trying to talk about marginalization, most people including educators and administrators didn’t really understand what that meant. Others noted that commitments to equity and anti-oppression were in fact being made by some boards, but that marrying these commitments with multi-year strategic plans and curricular design was actually a very complex undertaking.

They also noted that embracing human rights must be done using a whole-school approach. One educator said:

Education administrators, support staff, even the caretakers need to be apprised of what it means that some kids are hungry. If they are hanging out somewhere, make sure they can get food. Everyone is part of the team.

Finally, they spoke about teachers’ college as a potential place for change. Some felt they had many opportunities in teachers’ college to talk about social justice and equity. Many of the younger teachers were able to participate in programs like Urban Diversity and Social Justice Teaching that allowed them to bring in their own ideas about social justice and apply those as best as possible to what they were learning.

However, for the most part, the educators I spoke to felt they were not taught very much in teachers’ college about rights. But many felt this did not matter because teachers learned what they needed to know in the classroom; they did not believe that teachers’ college needed to be longer or that more material needed to be taught.

Supporting and training educators plays a large role in fostering interest in and respect for human rights in the classroom. Encouraging educators to draw on their personal stories and develop connections to rights, offering targeted resources for human rights education, supporting connections to Indigenous curricula, and working toward building a culture of rights at the level of school administration are all important ways to make sure that human rights education becomes a central part of the classroom.

Kate Butler is the Child Rights & Protection Advisor at Save the Children Canada. In this role, Kate is responsible for building capacity, developing material, and measuring & sharing what works as it relates to child rights, participation, and protection. She was previously the Lead, Human Rights and Learning at Maytree.

We spoke to 20 educators about what they need to bring human rights into the classroom.
Sign up for our newsletters