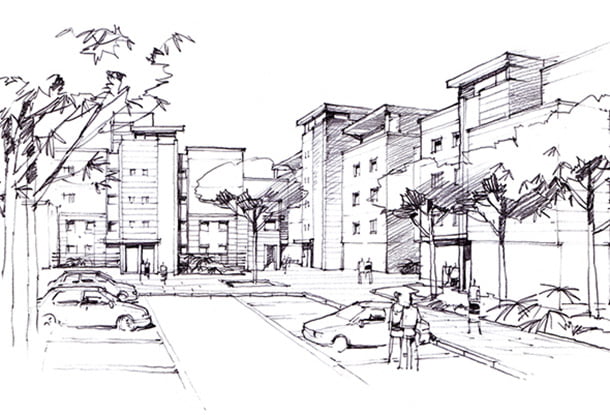 Around this time last year, I was invited to co-edit an anthology exploring inclusive city-building. I’d recently completed a photo essay documenting the social housing community where I lived before my mother completed her post-secondary education and moved us out. She was eager to leave behind all memories of social housing. For her, our time in the community was a shameful blip in a story of immigration and ascension to the “respectable” middle-class. For me, social housing has been a place of significance – a place where I spent my formative years developing unconditional friendships, resilience and city-building values.

It has also been a place fraught with numerous challenges including an under-aged sex trade that I witnessed, which claimed the life of a friend’s older sister. As an adult, working in placemaking and stakeholder engagement across academic and professional contexts, I’ve refused to accept the city’s growing disparity and increase in housing vulnerability. So in many ways when I was approached to co-edit and contribute to Subdivided, an anthology exploring inclusive city-building, my chapter on Designing Dignified Social Housing was already in progress. Using the aforementioned tragedy as a touch point, I explored social housing’s top-down design scheme, place-based stigma, lack of gender analysis and the urgent need to centralize human dignity going forward. I describe this chapter as a work of blood, memory and critique.

My work on the anthology and on this chapter in particular has led to an increased number of transformative social housing conversations with others working to create change. The following are just a few of the conversations that I’ve found to be particularly enriching.

Sandra Costain works in a leadership role for a local organization and also lived in Regent Park for the first 23 years of her life. Early in my writing process, I had the distinct pleasure of meeting with her to chat about the community and housing overall. Although fiercely proud of the neighbourhood, Sandra didn’t deny its shortcomings – widely publicized challenges such as public drinking, a drug trade and racial and geographic divisions. However, as a local insider, she also revealed the often overlooked beauty of the “old Regent Park.”

Along with her parents, Sandra was surrounded by a village of “aunties” – a local network of women who showered her with love and looked out for her as she attended neighbourhood barbecues or played an evening game of kick-the-can. The story that stood out most for me was about the now demolished Blevins building – a modernist high-rise designed by architect Peter Dickinson that became shrouded in violence and disrepair. What most people don’t know is that this same building was a place where Sandra mentored two generations of young women who created meaningful relationships with each other and later went on to pursue their post-secondary education.

Praise of Sandra’s work with these young women preceded my meeting with her and I was eager to learn more about the program. Due to a desire to engage young women in the neighbourhood, the organization that Sandra worked for tasked her with initiating a group for them.

The apartment unit the group was assigned was filthy-dirty and she asked the young women to meet her on the weekend to clean it up. Although she promised them homemade spaghetti, she secretly doubted that they would spend their day ripping up dusty carpets and scrubbing down every surface. When Sandra arrived to find the women ready to clean wearing head scarves and old clothing she was surprised. Many of these girls had been negatively labelled or written off by the wider community but all of them were dedicated to co-creating a beautiful programming space, which housed health education, life skills training and communal meals.

Most city-builders view the history of the Blevins building in a narrow and negative manner. However, when we take the time to listen to alternate stories told by people deeply enmeshed in social housing communities we can gain more nuanced understanding of specific neighbourhoods, which can help inform programming and placemaking initiatives.

I first met Michael McClelland, founding principal of ERA Architects, while working on a previous community engagement project and we quickly developed a warm rapport. So when I was invited to exchange ideas with him and his colleagues Ya’el Santopinto and Graeme Stewart, I was excited. We began with updates about our respective social housing initiatives and it was immediately clear that they embraced a comprehensive asset-based approach. I struggled to embrace their positive view of high-rise social housing towers. I’m a passionate advocate of the individuals inhabiting the towers – my early years in social housing exposed me to incredibly resilient and kind neighbours – but I’ve always been very critical of the design of most social housing towers.

However, these design leaders were emphatic that along with residents, the towers are an asset and, if properly retrofitted and maintained, they could be a part of the solution to social housing challenges. Given the firm’s expertise in the area of tower renewal and my general desire to lead by continually learning, I suspended my disbelief and listened intently.

The team outlined how Toronto’s strange configuration of high-density tower communities, built outside of the core, inadvertently facilitated the settlement of newcomers from around the world who require affordable three- and four-bedroom units. Instead of bemoaning the design of these towers, ERA has researched ways that these structures could be used to respond to not only the needs but also the skills and aspirations of residents. They found that outdated zoning bylaws were prohibiting residents from using existing space to better meet their needs.

In respectful collaboration with residents and a number of external stakeholders, such as Toronto Public Health, United Way Toronto & York Region and City planners, they recently addressed this barrier to transformation by advocating for a new, more responsive zoning by-law called Residential Apartment Commercial (RAC), which opens up new possibilities for residents to do things like run a part-time barber shop out of their apartment unit or initiate a youth art pop-up shop. This tangible example of how towers can be used for change has expanded my asset-based approach to include tower design.

I was introduced to Stewart Chisholm by a colleague who suggested that we share a similar approach to resident engagement. I learned that Stewart has an extensive background in environmental planning and community mobilization. Like me, he is interested in the complicated intersections of spatial design and social justice. Our first conversation took place around a table with his fellow Toronto Community Housing (TCH) staff members leading a new, resident-focused, pilot project called Reset. We discussed a number of important topics including the need for evaluation and the value of building meaningful resident relationships. Stewart and I began to riff on the idea of a shared leadership model – a model that expands the number of people involved in decision-making processes.

It was apparent that Stewart has spent a considerable amount of time considering the value of this approach. We agreed that a shared leadership model prevents the favouring of TCH residents who are comfortable participating in formal processes. While these residents can bring an important perspective, their needs often differ from those residents more deeply ensconced within social housing’s margins. Stewart also pointed out that a shared leadership approach is practical; it’s a form of succession planning, which safeguards projects from falling apart when one or two individuals move out of the community or onto new opportunities. In a subsequent conversation we also discussed the ways that these hybrid grassroots-governance models can enable residents to take the lead on addressing local issues and also ensure that government doesn’t abdicate their responsibilities.

Equally important, Stewart openly acknowledged his privilege as a white male without lived experience of social housing tenancy or housing vulnerability. I shared that although I am a woman of colour and grew up in social housing, that I too was vigilant about my privilege. I’m aware of the ways race, class, ability and citizenship can create more or less space for individuals within a shared leadership model, and cities overall. Given the personal nature of housing, vulnerability of many residents and historical neglect, it’s important for all of us to be mindful and walk gently within the communities we are collaborating with.

These conversations about social privilege, shared leadership, local knowledge and systemic change are all integral in addressing an increasingly complex range of social housing issues. My work on Subdivided has created unexpected opportunities to talk with people from a wide range of professional and personal backgrounds. I’m more convinced than ever that true social housing transformation is possible but we need to create space for more inclusive, creative and action-orientated conversations.

Addressing an increasingly complex range of social housing issues through conversations.
Sign up for our newsletters