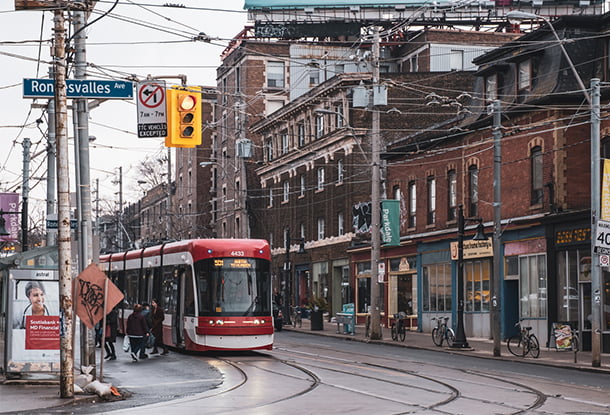 Transit ridership in Toronto dropped dramatically at the beginning of the pandemic as people who could work from home stayed put. But essential transit trips continued for those who relied on public transit to get groceries, access medical care, and commute to essential workplaces. A survey conducted by University of Toronto researchers found that people who continued to use transit during the pandemic were more likely to be people of colour, earn lower incomes, have a disability, or be born outside of Canada.

Fewer riders meant fewer fares collected by Toronto Transit Commission (TTC), which typically counts on fares for nearly 70 per cent of its operating budget, one of the highest “farebox recovery ratios” in Canada and the United States. The provincial and federal governments provided emergency operations funding through the Safe Restart Agreement, but the TTC is projecting lower ridership and matching budget shortfalls into 2023. So the ridership decline during the pandemic has highlighted the TTC’s over-reliance on the farebox.

Against the backdrop of the COVID-19 pandemic and low ridership, the TTC is reviewing its fare policies and creating a Five-Year Fare Plan. The fare policy review is a golden opportunity to reimagine the role of public transit as a human right and advance a pandemic recovery plan that addresses poverty, racism, and the digital divide.

TTCriders, the membership-based organization for which I work, is involving hundreds of people through focus groups and surveys to make sure transit users’ priorities are reflected in the TTC’s new plan and to develop principles together. Conversations have already surfaced key themes of racism from fare policing, the high health and social costs of unaffordable and unreliable transit, and many ideas for small changes that could have a big impact, such as having Wheel Trans call centre staff speak your language.

Here’s just a small sample of what we heard:

“Transit requires a significant portion of my monthly income and means I have to scrimp in other areas in order to afford to get around.”

“With limited income and high rent costs, I often have to choose between monthly passes and groceries.”

“Transit means freedom to me – freedom to explore this city and live my life to the fullest with no constraints.”

Some existing discount programs should be expanded

The success of Toronto’s Fair Pass program should point the way forward, though it must become more accessible and affordable. The discount was approved as part of the City of Toronto’s Poverty Reduction Strategy in 2016, and has generated greater transit use and access to opportunities. Yet many people who would be eligible for the discount report that they still cannot afford the monthly Fair Pass at $123.25. In fact, this discounted pass is more expensive than conventional transit passes in most Canadian cities. Discounted single fares of $2.10, on the other hand, are used more and are available on the Presto Fair Pass card.

The Fair Pass was meant to be expanded to all low-income residents (defined as earning the Low Income Measure plus 15%), but is currently only available to people receiving Ontario Works, Ontario Disability Support Program, a Child Care Fee Subsidy, and soon to residents in Rent-Geared-to-Income housing.

Technical barriers and the complicated application process have limited access to the Fair Pass program, especially for residents without online banking or living in suburban neighbourhoods without access to nearby Presto machines. As Nevena Dragicevic, Maytree’s lead for its work on human rights cities, points out in a recent blog post, “well-intentioned programs also sometimes fail to reach the very people they are meant to support because they do not sufficiently account for the circumstances of those in greatest need.” Many recommended improvements identified in a 2019 City report have yet to be implemented, such as eliminating the different light and sound emitted when a Fair Pass is tapped, something that has disproportionately impacted Indigenous peoples’ Fair Pass usage.

The TTC has approved a “U-Pass” framework, but the inability for students to opt out has been a stumbling block during campus referendum campaigns. Another specialty program is fare-free transit for people who are legally blind provided in partnership with the Canadian National Institute for the Blind.

“What good is a shelter if you can’t get to it?”

As lived experience anti-poverty activist Bee Lee Soh pointed out at a recent panel discussion, the City of Toronto provides a limited number of tokens to some shelters and drop-ins and community centres for distribution on extreme weather alert days. But this measure won’t help someone get to a shelter, warming centre, or cooling centre in the first place and is not workable for people in suburban areas where they are not within walking distance of a drop-in. This is why the Fair Fare Coalition has called for free TTC on extreme weather alert days.

The connection between transit and shelter was brought home by the inquest into the tragic death of Grant Faulkner in 2015. Jury recommendation #22 asked the TTC and Metrolinx, a transportation agency of the government of Ontario, to consider the “importance of ensuring appropriate access to transportation for individuals who are homeless, and consult with members of the Scarborough community when it is considering these issues to ensure that the transition to Presto technology does not create barriers.”

The need for more service to address crowding has persisted throughout the pandemic, with bus crowding occurring mostly on routes serving neighbourhood improvement areas and essential workplaces. Adding more service and implementing bus-only lanes would quickly improve bus service in neighbourhoods with the highest rates of COVID-19, an idea supported by the Toronto Office of Recovery and Rebuild.

The fact that buses have been busier than subways during the pandemic, and are used more frequently by Fair Pass users, is proof of David Hulchanski’s research on income polarization. Residents of neighbourhoods with the lowest average incomes must travel further to work yet lack access to rapid transit, while neighborhoods with subway stations have gentrified and, as new research by Cheryll Case of CP Planning points out, new rapid transit drives up rents.

As the TTC drafts its new fare policy, what principles could it adopt to drive a human rights-based approach to public transit?

Let’s start with these three ideas:

Public transit unlocks our access to education, health care, employment, community connection, and going to the grocery store or food bank. Treating public transit as a human right recognizes the essential role it has played during the pandemic and will support an equitable recovery.

The fare policy review by the Toronto Transit Commission is a golden opportunity to reimagine the role of public transit as a human right and advance a pandemic recovery plan that addresses poverty, racism, and the digital divide.
Sign up for our newsletters